The naira (sign: ₦) is the official currency of Nigeria. 100 Kobo makes one naira.

The Central Bank of Nigeria (CBN) issues money throughout the Nigerian Federation. It controls the amount of money supply in the economy in order to ensure the economy and prices are stable. The Currency & Branch Operations Department of the CBN is in charge of currency management. They get the naira notes and coins from its special printers. Then they distribute/supply, process, and reissue it. They also receive and destroy old and unusable bank notes and coins.

Nigeria started using the naira on 1 January 1973, replacing the pound at a rate of 2 naira = 1 pound.. The currency sign is ₦. 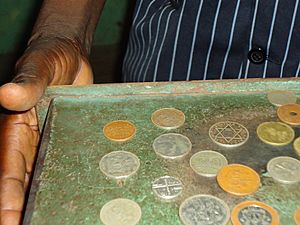 In 1973, coins were introduced in denominations of ½, 1, 5, 10 and 25 kobo, with the ½ and 1 kobo in bronze and the higher denominations in cupro-nickel. The ½ kobo coins were minted only that year. In 1991, smaller 1, 10 and 25 kobo coins were issued in copper-plated-steel, along with nickel-plated-steel 50 kobo and 1 naira. On 28 February 2007, new coins were issued in denominations of 50 kobo, 1 and 2 naira, with the 1 and 2 naira bimetallic. Some Nigerians complained that the weight of the ₦2 coin especially how heavy it is when there is a lot of it . The CBN announced that the old coins are to be replaced with the new ones on or before 31 May 2007. The central bank also stated that the ½ to 25 kobo coins withdrew withdrawn from circulation with from 28 February 2007.

All content from Kiddle encyclopedia articles (including the article images and facts) can be freely used under Attribution-ShareAlike license, unless stated otherwise. Cite this article:
Nigerian naira Facts for Kids. Kiddle Encyclopedia.