The pilcrow (¶), also called the paragraph mark, paragraph sign, paraph, alinea (Latin: a lineā, "off the line"), or blind P, is a typographical character for individual paragraphs.

The pilcrow can be used as an indent for separate paragraphs or to designate a new paragraph in one long piece of copy, as Eric Gill did in his 1930s book An Essay on Typography. The pilcrow was a type of rubrication used in the Middle Ages to mark a new train of thought, before the convention of visually discrete paragraphs was commonplace.

The pilcrow is usually drawn similar to a lowercase q reaching from descender to ascender height; the loop can be filled or unfilled. It may also be drawn with the bowl stretching further downwards, resembling a backwards D; this is more often seen in older printing. 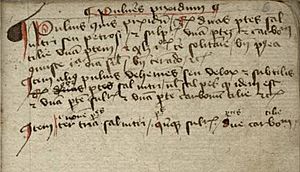 Three short paragraphs on making gunpowder in the manuscript GNM 3227a (Germany, c. 1400); the first paragraph is marked with an early form of the pilcrow sign, the two following paragraphs are introduced with litterae notabiliores (literally: enlarged letters). 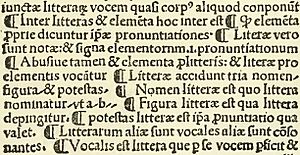 Pilcrow signs in an excerpt from a page of Villanova, Rudimenta Grammaticæ, printed by Spindeler in 1500 in Valencia.

The word pilcrow originates from the Greek word paragraphos. This was rendered in Old French as paragraphe and later changed to pelagraphe. The earliest reference of the modern pilcrow is in 1440 with the Middle English word pylcrafte.

The first way to divide sentences into groups in Ancient Greek was the original paragraphos, which was a horizontal line in the margin to the left of the main text. As the paragraphos became more popular, the horizontal line eventually changed into the Greek letter Gamma (Γ and γ) and later into litterae notabiliores, which were enlarged letters at the beginning of a paragraph. This notation soon changed to the letter K, an abbreviation for the Latin word kaput, which translates as "head", i.e. it marks the head of a new thesis. Eventually, to mark a new section, the Latin word capitulum, which translates as "little head", was used, and the letter C came to mark a new section in 300 BC.

In the 1100s, C had completely replaced K as the symbol for a new chapter. Rubricators eventually added one or two vertical bars to the C to stylize it (as ⸿); the symbol was filled in with dark ink and eventually looked like the modern pilcrow (¶).

In legal writing, it is used whenever one must cite a specific paragraph within pleadings, law review articles, statutes, or other legal documents and materials.

In academic writing, it is sometimes used as an in-text referencing tool to make reference to a specific paragraph from a document that does not contain page numbers, allowing the reader to find where that particular idea or statistic was sourced. The pilcrow sign followed by a number indicates the paragraph number from the top of the page. It is rarely used when citing books or journal articles.

In some high-church Anglican and Episcopal churches, it is used in the printed order of service to indicate that instructions follow; these indicate when the congregation should stand, sit, and kneel, who participates in various portions of the service, and similar information.

Online, it is used in some blogs and wikis to denote permalinks.

The pilcrow is used in desktop publishing software such as desktop word processors and page layout programs to mark the presence of a carriage return control character at the end of a paragraph. It is also used as the icon on a toolbar button that shows or hides the pilcrow and similar hidden characters, including tabs, whitespace, and page breaks. In typing programs, it marks a return that one must type.

The pilcrow may indicate a footnote in a convention using a sequence of distinct typographic symbols in sequence to distinguish the footnotes on a given page; it is the sixth in a series of footnote symbols beginning with the asterisk.

All content from Kiddle encyclopedia articles (including the article images and facts) can be freely used under Attribution-ShareAlike license, unless stated otherwise. Cite this article:
Pilcrow Facts for Kids. Kiddle Encyclopedia.