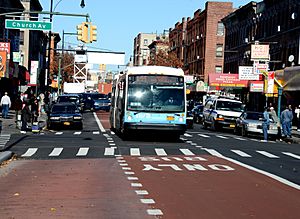 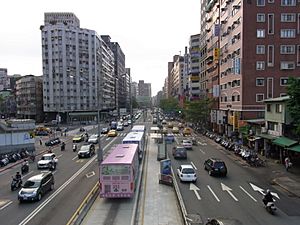 Bus lane in the middle of Roosevelt Road in Taipei, Taiwan

A bus lane or bus-only lane is a lane limited to buses, and are used to speed up public transport that otherwise would be held up by traffic congestion.

All content from Kiddle encyclopedia articles (including the article images and facts) can be freely used under Attribution-ShareAlike license, unless stated otherwise. Cite this article:
Bus lane Facts for Kids. Kiddle Encyclopedia.