Crag and tail facts for kids 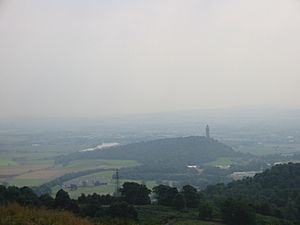 The Abbey Craig, a crag with tail near the University of Stirling. The Wallace Monument stands on the crag at the right, and the long tail slopes down leftward 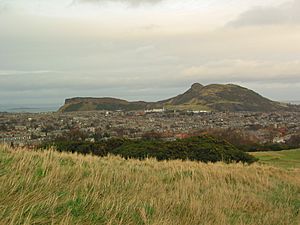 A crag (sometimes spelled cragg, or in Scotland craig) is a rocky hill or mountain, generally isolated from other high ground.

Crags are formed when a glacier or ice sheet passes over an area that contains a particularly resistant rock formation (often granite, a volcanic plug or some other volcanic structure). The force of the glacier erodes the surrounding softer material, leaving the rocky block protruding from the surrounding terrain. Frequently the crag serves as a partial shelter to softer material in the wake of the glacier, which remains as a gradual fan or ridge forming a tapered ramp (called the tail) up the leeward side of the crag.

In older examples, or those latterly surrounded by the sea, the tail is often missing, having been removed by post-glacial erosion.

Examples of crag and tail formations include:

All content from Kiddle encyclopedia articles (including the article images and facts) can be freely used under Attribution-ShareAlike license, unless stated otherwise. Cite this article:
Crag and tail Facts for Kids. Kiddle Encyclopedia.