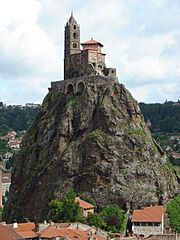 A volcanic plug is a landform created when volcanic magma hardens inside a vent on an active volcano. They are sometimes called volcanic necks or puys. The plug is revealed when surrounding land is eroded.

As it forms, a plug may cause an extreme build-up of pressure if gas-charged magma is trapped beneath it. This sometimes leads to an explosive eruption. But if the explosion does not occur, then the volcano becomes a solid block made of hard material.

The plug is usually harder than the surrounding rock. Glacial erosion can lead to exposure of the plug on one side, while a long slope of material remains on the lee side. Such landforms are called crag and tail. If a plug is preserved, erosion may remove the surrounding rock while the erosion-resistant plug remains. This is what produces the distinctive upstanding landform. 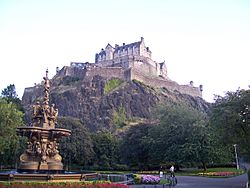 Edinburgh Castle in Scotland is built on an ancient volcanic plug.

All content from Kiddle encyclopedia articles (including the article images and facts) can be freely used under Attribution-ShareAlike license, unless stated otherwise. Cite this article:
Volcanic plug Facts for Kids. Kiddle Encyclopedia.