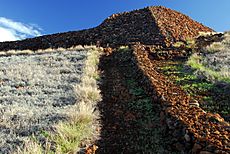 The ruins of Puʻukohola Heiau, a Hawaiian temple (heiau) used as a place of worship and sacrifice.

The Hawaiian religion is a religion. It includes the folk religious beliefs and practises of the Hawaiian people. It started amongst the Tahitians and other Pacific islanders who landed in Hawaiʻi between 500 and 1300 AD. Today, Hawaiian religious practices are protected by law.

Hawaiian religion is animistic. It is based on a belief that spirits are found in non-human beings and objects such as animals, the waves, and the sky.

Another way of dividing them is into three major groups:

All content from Kiddle encyclopedia articles (including the article images and facts) can be freely used under Attribution-ShareAlike license, unless stated otherwise. Cite this article:
Hawaiian religion Facts for Kids. Kiddle Encyclopedia.