Kids Encyclopedia Facts
For the 1999 film, see Molokai: The Story of Father Damien.

Molokai or Molokaʻi, is the fifth most populated of the eight major islands that make up the Hawaiian Islands archipelago in the middle of the Pacific Ocean. It is 38 by 10 miles (61 by 16 km) in size at its greatest length and width with a usable land area of 260 sq mi (673.40 km2), making it the fifth-largest of the main Hawaiian Islands and the 27th largest island in the United States. It lies southeast of Oʻahu across the 25 mi (40 km) wide Kaʻiwi Channel and north of Lānaʻi, separated from it by the Kalohi Channel.

The island's agrarian economy has been driven primarily by cattle ranching, pineapple production, sugarcane production and small-scale farming. Tourism comprises a small fraction of the island's economy, and much of the infrastructure related to tourism was closed and barricaded in the early 2000s when the primary landowner, Molokai Ranch, ceased operations due to substantial revenue losses. In Kalawao County, on the Kalaupapa Peninsula on the north coast, settlements were established in 1866 for quarantined treatment of persons with leprosy; these operated until 1969. The Kalaupapa National Historical Park now preserves this entire county and area. Several other islands are visible from the shores of Molokaʻi, including Oʻahu from the west shores; Lānaʻi from the south shores, and Maui from the south and east shores. 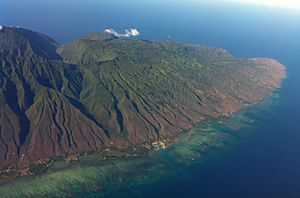 Eastern Molokai with a portion of Kamakou and Molokai Forest Reserve

Molokaʻi developed from two distinct shield volcanoes known as East Molokaʻi and the much smaller West Molokaʻi. The highest point is Kamakou on East Molokaʻi, at 4,970 feet (1,510 m). Today, East Molokaʻi volcano, like the Koʻolau Range on Oʻahu, is what remains of the southern half of the original mountain. The northern half suffered a catastrophic collapse about 1.5 million years ago and now lies as a debris field scattered northward across the bottom of the Pacific Ocean. What remains of the volcano on the island include the highest sea cliffs in the world. The south shore of Molokaʻi boasts the longest fringing reef in the U.S. and its holdings—nearly 25 miles (40 km) long.

Molokaʻi is part of the state of Hawaiʻi and located in Maui County, except for the Kalaupapa Peninsula, which is separately administered as Kalawao County. Maui County encompasses Maui, Lānaʻi, and Kahoʻolawe in addition to Molokaʻi. The largest town on the island is Kaunakakai, which is one of two small ports on the island. Molokai Airport is located on West Molokaʻi. The United States Census Bureau divides the island into three census tracts: Census Tract 317 and Census Tract 318 of Maui County, Hawaii, and Census Tract 319 of Kalawao County, Hawaii. The total 2010 census population of these was 7,345, living on a land area of 260.02 square miles (673.45 km2). Molokaʻi is separated from Oʻahu on the west by the Kaiwi Channel, from Maui on the southeast by the Pailolo Channel, and from Lānaʻi on the south by the Kalohi Channel. 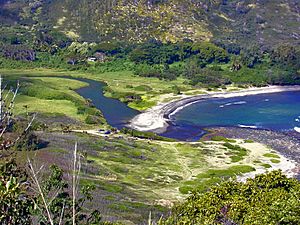 Molokaʻi is split into two main geographical areas. The low western half is very dry and the soil is heavily denuded due to poor land management practices, which allowed over-grazing by goats. It lacks significant ground cover and virtually the entire section is covered in non-native kiawe (Prosopis pallida) trees. One of the few natural areas remaining almost intact are the coastal dunes of Moʻomomi, which are part of a Nature Conservancy preserve.

The eastern half of the island is a high plateau rising up to an elevation of 4,900 ft (1,500 m) on Kamakou peak and includes the 2,774 acres (11.23 km2; 4.334 sq mi) Molokai Forest Reserve. The eastern half is covered with lush wet forests that get more than 300 in (7,600 mm) of rain per year. The high-elevation forests are populated by native ʻōhiʻa lehua (Metrosideros polymorpha) trees and an extremely diverse endemic flora and fauna in the understory. Much of the summit area is protected by the Nature Conservancy's Kamakou and Pelekunu valley preserves. Below 4,000 feet (1,200 m), the vegetation is dominated by exotic flora, including strawberry guava (Psidium littorale), eucalyptus (Eucalyptus spp.), and cypress (Cupressus spp.). Introduced axis deer (Axis axis) and feral pigs (Sus scrofa) roam native forests, destroying native plants, expanding exotic plants through disturbance and distribution of their seeds, and threatening endemic insects. Near the summit of Kamakou is the unique Pepeʻopae bog, where dwarf ʻōhiʻa and other plants cover the soggy ground. .

Molokaʻi is home to a great number of endemic plant and animal species. However, many of its species, including the olomaʻo (Myadestes lanaiensis), kākāwahie (Paroreomyza flammea), and the Molokaʻi ʻōʻō (Moho bishopi) have become extinct. Molokaʻi is home to a wingless fly among many other endemic insects.

It used to be thought that Molokaʻi was first settled around AD 650 by indigenous peoples most likely from the Marquesas Islands. However, a 2010 study using revised, high-precision radiocarbon dating based on more reliable samples has established that the period of eastern Polynesian colonization of the Marquesas Islands took place much later, in a shorter time frame of two waves: the "earliest in the Society Islands c. 1025–1120, four centuries later than previously assumed; then after 70–265 years, dispersal continued in one major pulse to all remaining islands c. 1190–1290." Later migrants likely came from Tahiti and other south Pacific islands. Although Captain James Cook recorded sighting Molokaʻi in 1778, the first European sailor to visit the island was Captain George Dixon of the British Royal Navy in 1786. The first significant European influence came in 1832 when a Protestant mission was established at Kaluaʻaha on the East End of the island by Reverend Harvey Hitchcock. In the late 1800s, King Kamehameha V built a vacation home in Kaunakakai and ordered the planting of over 1,000 coconut trees in Kapuaiwa Coconut Grove.

Leprosy (later known as Hansen's disease) was among Eurasian diseases introduced to the Hawaiʻian islands by traders, sailors, workers and others who lived in societies where these diseases were endemic. Because of the islanders' lack of immunity to the new diseases, they suffered high rates of infection and death from smallpox, cholera and whooping cough, as well as leprosy. Sugar planters were worried about the effects on their labor force and pressured the government to take action to control the spread of leprosy.

The legislature passed a control act requiring quarantine of people with leprosy. The government established Kalawao located on the isolated Kalaupapa peninsula on the northern side of Molokaʻi, followed by Kalaupapa as the sites of a leper colony that operated from 1866 to 1969. Because Kalaupapa had a better climate and sea access, it developed as the main community. A research hospital was developed at Kalawao. The population of these settlements reached a peak of 1100 shortly after the turn of the 20th century.

In total over the decades, more than 8500 men, women and children living throughout the Hawaiian islands and diagnosed with leprosy were exiled to the colony by the Hawaiian government and legally declared dead. This public health measure was continued after the Kingdom became a U.S. territory. Patients were not allowed to leave the settlement nor have visitors and had to live out their days here. In the 21st century, there are no persons on the island with active cases of leprosy, which has been controlled through medication, but some former patients chose to continue to live in the settlement after its official closure.

Father Damien de Veuster, a Belgian priest of the Congregation of the Sacred Hearts of Jesus and Mary served as a missionary for 16 years in the communities of sufferers of leprosy. Joseph Dutton, who served in the 13th Wisconsin Volunteer Infantry Regiment during the American Civil War, and who converted to Roman Catholicism in 1883, came to Molokai in 1886 to help Father Damien and the rest of the population who suffered from leprosy. He stayed there until his own death in 1931. Mother Marianne Cope of the Sisters of Saint Francis of Syracuse, New York, brought six of her Sisters from to work in Hawaiʻi with leprosy sufferers in the late 19th century, also serving on Molokai. Both Father Damien and Mother Marianne have been canonized as saints by the Roman Catholic Church for their charitable work and devotion to sufferers of leprosy. In December 2015, the cause of Joseph Dutton was formally opened, obtaining him the title as Servant of God.

Over the years Molokai Ranch has also acted as a developer, establishing hotels and related amenities for resort tourists on their property. The local indigenous community fought for many decades to inhibit the development by Molokai Ranch in order to preserve their community and unique way of life. In some cases, protests have become violent, such as fence cutting, poisoning of the Ranch's exotic African Safari animals in 1994, an arson attack in Kaupoa in 1995, and the destruction of 5 mi (8.0 km) of Ranch water pipes in 1996.

In 2007, community residents organized the "Save Laʻau Point" movement to oppose Molokai Ranch's attempt to expand its resort operation. As a result, on March 24, 2008, Molokai Ranch, then the island's largest employer, decided to shut down all resort operations, including hotels, movie theater, restaurants, and golf course, and dismiss 120 workers. In September 2017 the company that owns Molokai Ranch, Singapore-based Guoco Leisure Ltd, put this 55,575 acres (22,490 ha) property, encompassing 35% of the island of Molokaʻi, on the market for $260 million.

Due to the fight against development and tourism, Molokaʻi has Hawaiʻi's highest unemployment rate. The residents have fought hard to maintain a lifestyle based on indigenous subsistence practices. This lifestyle is not without challenges, however, and many live below the federal poverty line. One third of its residents use food stamps. As of 2014[update], the largest industry on the island is seed production for Monsanto and Mycogen Seeds, including GMO seeds. 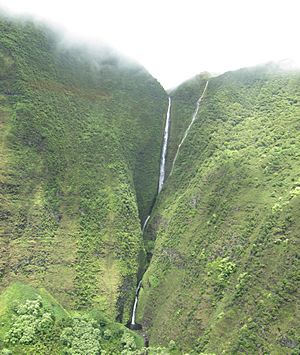 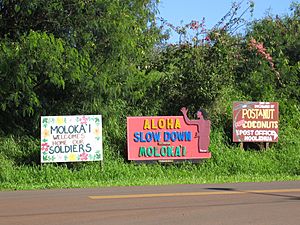 The tourism industry on Molokaʻi is relatively small, compared to the other islands in Hawaiʻi. Only 64,767 tourists visited Molokaʻi in 2015. For decades, residents of Molokaʻi have resisted private developers' attempts to increase tourism because of the irreparable changes to community and culture that are associated with a tourism industry. Accommodations are limited; as of 2014, only one hotel was open on the island. Most tourists find lodgings at rental condos and houses.

Molokaʻi is believed to be the birthplace of the hula. The annual Molokaʻi Ka Hula Piko festival is held on this island.

Molokaʻi can be reached by plane. Planes fly into Molokaʻi daily from other Hawaiian islands including Oʻahu (Honolulu and Kalaeloa), Maui (Kahului) and Hawaiʻi (Kona) on Mokulele Airlines, Paragon Air and Hawaiian Airlines.

The island can be traversed by a two-lane highway running east to west (highways 450 and 460). Highway 470 is a spur up to the barrier mountains of Kalawao County and the Kalaupapa peninsula. By land this area (Kalaupapa) can only be reached by a hiking trail. Mule rides on the trail were suspended in 2018 when the trail temporarily closed due to a landslide and bridge damage. Most access to the Kalaupapa peninsula is by sea.

All content from Kiddle encyclopedia articles (including the article images and facts) can be freely used under Attribution-ShareAlike license, unless stated otherwise. Cite this article:
Molokai Facts for Kids. Kiddle Encyclopedia.