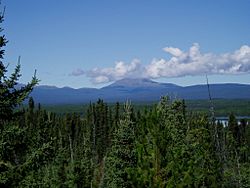 Mount Edziza, a shield volcano, in British Columbia seen from the Stewart-Cassiar Highway

A shield volcano is a large volcano with shallowly-sloping sides. The name derives from a translation of "Skjaldbreiður", an Icelandic shield volcano whose name means "broad shield," from its resemblance to a warrior's shield.

Shield volcanoes are formed by lava that flows easily. Consequently, a volcanic mountain having a broad profile is built up over time by flow after flow of relatively fluid basaltic lava issuing from vents or fissures on the surface of the volcano. Many of the largest volcanoes on Earth are shield volcanoes. 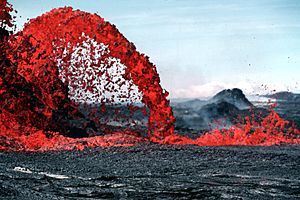 The largest is Mauna Loa on the Big Island of Hawaii. Shield volcanoes can be so large they are sometimes considered a mountain range, such as the Ilgachuz Range and the Rainbow Range, both of which are in Canada. These shield volcanoes formed when the North American Plate moved over a hotspot similar to the one feeding the Hawaiian Islands, called the Anahim hotspot. There are also shield volcanoes, for example, in Washington, Oregon, and the Galapagos Islands. The Piton de la Fournaise, on Reunion Island, is one of the more active shield volcanoes on earth, with one eruption per year on average.

Shield volcanoes are known to form on other planets. The largest known mountain in the solar system, Olympus Mons on Mars, is a shield volcano. Shield volcanoes on Mars are higher and much more massive than those on Earth.

On Earth, because of plate tectonics, hotspot volcanoes eventually move away from the source of their magma and the volcanoes are individually less massive than might otherwise be the case. Shield volcanoes usually occur along constructive boundaries or above hotspots. However, the many large shield volcanoes of the Cascade Range of northern California and Oregon are over a more complex environment.

All content from Kiddle encyclopedia articles (including the article images and facts) can be freely used under Attribution-ShareAlike license, unless stated otherwise. Cite this article:
Shield volcano Facts for Kids. Kiddle Encyclopedia.