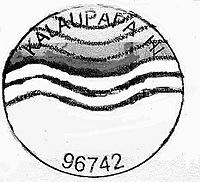 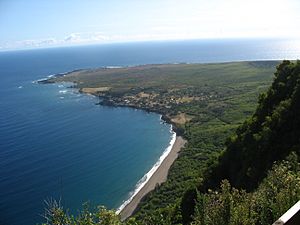 Kalaupapa Peninsula as seen from a descent down the sea cliffs

Kalaupapa is a small unincorporated community on the island of Molokaʻi, within Kalawao County in the U.S. state of Hawaii. In 1866, during the reign of Kamehameha V, the Hawaii legislature passed a law that resulted in the designation of Molokaʻi as the site for a leper colony, where seriously affected patients could be quarantined, to prevent them from infecting others. At the time, the disease was little understood: it was believed to be highly contagious and incurable. The communities where persons with leprosy lived and were treated were under the administration of the Board of Health, which appointed superintendents on the island.

Kalaupapa is located on the Kalaupapa Peninsula at the base of some of the highest sea cliffs in the world; they rise 2,000 feet (610 m) above the Pacific Ocean. In the 1870s a community to support the leper colony was established here; the legislature required people with severe cases to be quarantined on this island in the hope of preventing contagious transmission of the disease. The area has been preserved as the Kalaupapa Leprosy Settlement and National Historical Park, which takes in the entire county.

Despite the declining population, the post office is still active, having a zip code of 96742.

The village is the site of a former settlement for leprosy patients. The original leper colony was first established in Kalawao in the east, opposite to the village corner of the peninsula. It was there where Father Damien settled in 1873. Later it was moved to the location of the current village, which was originally a Hawaiian fishing village. The settlement was also attended by Mother Marianne Cope, among others. At its peak, about 1,200 men, women, and children were in exile in this island prison. The isolation law was enacted by King Kamehameha V and remained in effect until 1969, when it was finally repealed. Today, about fourteen former sufferers of leprosy (which is also known as Hansen's Disease) continue to live there. The colony is now included within Kalaupapa National Historical Park.

Shortly before the end of mandatory isolation in 1969, the state legislature considered closing the facility entirely. Intervention by interested persons, such as entertainer Don Ho and TV newsman Don Picken, resulted in allowing the residents who chose to do so to remain there for life. The opponents to closure pointed out that, although there were no active cases of leprosy in the colony, many of the residents were physically scarred by the disease to an extent that would make their integration into mainstream society difficult if not impossible.

All content from Kiddle encyclopedia articles (including the article images and facts) can be freely used under Attribution-ShareAlike license, unless stated otherwise. Cite this article:
Kalaupapa, Hawaii Facts for Kids. Kiddle Encyclopedia.