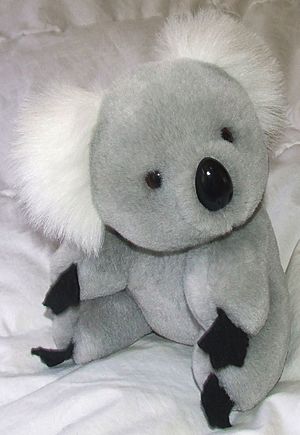 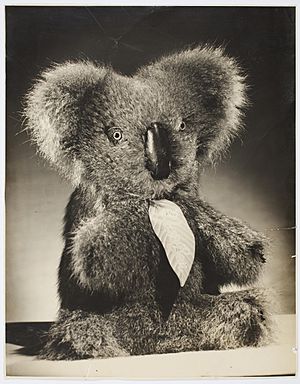 The koala, or, inaccurately, koala bear (a common term outside of Australia, though koalas are marsupials, not bears), is an arboreal herbivorous marsupial native to Australia. It is the only extant representative of the family Phascolarctidae and its closest living relatives are the wombats.

The koala is found in coastal areas of the mainland's eastern and southern regions, inhabiting Queensland, New South Wales, Victoria, and South Australia. It is easily recognisable by its stout, tailless body and large head with round, fluffy ears and large, spoon-shaped nose. The koala has a body length of 60–85 cm (24–33 in) and weighs 4–15 kg (9–33 lb). Colour ranges from silver grey to chocolate brown. Koalas from the northern populations are typically smaller and lighter in colour than those further south.

Koalas typically inhabit open eucalyptus woodlands, and the leaves of these trees make up most of their diet. Because this diet has limited nutritional and caloric content, koalas are largely sedentary and sleep up to 20 hours a day. They avoid social interaction, and bonding exists only between mothers and dependent offspring.

Adult males communicate with loud bellows that intimidate rivals and attract mates. Males mark their presence with secretions from scent glands located on their chests. Being marsupials, koalas give birth to underdeveloped young that crawl into their mothers' pouches, where they stay for the first six to seven months of their lives. These young koalas, known as joeys, are fully weaned around a year old.

Koalas have few natural predators and parasites, but are threatened by various pathogens, such as Chlamydiaceae bacteria and the koala retrovirus, as well as by bushfires and droughts.

Because of its distinctive appearance, the koala is recognised worldwide as a symbol of Australia. The animal was hunted heavily in the early 20th century for its fur, and large-scale cullings in Queensland resulted in a public outcry that initiated a movement to protect the species. Sanctuaries were established, and translocation efforts moved to new regions koalas whose habitat had become fragmented or reduced.

The koala is not an endangered species, but it is a near vulnerable species. One reason is the loss of habitat, which means that koalas have less space to live. In some places there are very few koalas left. But there are also places, such as French Island (Victoria), with too many koalas that eat too much. Because of this the eucalyptus trees and other animals are in danger. A study looking at koala numbers at 1800 sites for 20 years, shows that the number of koalas is falling. The study, by the Australian Koala Foundation, estimates that there are only about 50,000 koalas left.

Koalas are often called the koala bears because it looks like a small bear or teddy bear. However, it is not a bear, it is quite a different type of animal. The word koala comes from the Dharug gula, meaning no water. 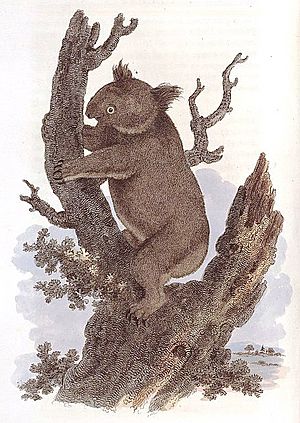 Koalas were hunted by Indigenous Australians and depicted in myths and cave art for millennia. The koala is featured in the Dreamtime stories and mythology of indigenous Australians. The Tharawal people believed that the animal helped row the boat that brought them to the continent. Another myth tells of how a tribe killed a koala and used its long intestines to create a bridge for people from other parts of the world.

Several stories tell of how the koala lost its tail. In one, a kangaroo cuts it off to punish the koala for being lazy and greedy. Tribes in both Queensland and Victoria regarded the koala as a wise animal and sought its advice. Bidjara-speaking people credited the koala for turning barren lands into lush forests. The animal is also depicted in rock carvings, though not as much as some other species. 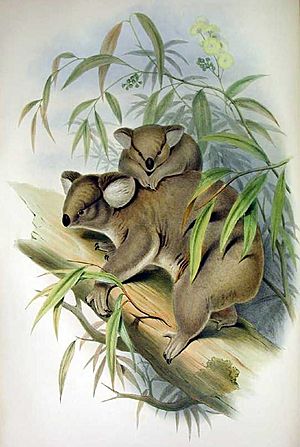 The first recorded encounter between a European and a koala was in 1798, and an image of the animal was published in 1810 by naturalist George Perry. Botanist Robert Brown wrote the first detailed scientific description of the koala in 1814, although his work remained unpublished for 180 years.

Popular artist John Gould illustrated and described the koala, introducing the species to the general British public. The first living koala in Britain arrived in 1881, purchased by the Zoological Society of London. Further details about the animal's biology were revealed in the 19th century by several English scientists.

Prince Henry, Duke of Gloucester, visited the Koala Park Sanctuary in Sydney in 1934 and was "intensely interested in the bears". His photograph, with Noel Burnet, the founder of the park, and a koala, appeared in The Sydney Morning Herald. 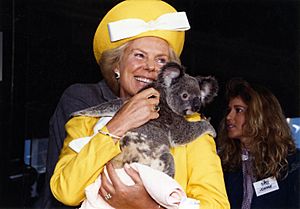 The Duchess of Kent with koala 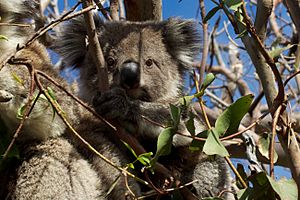 Koalas have brownish-grey or silver-grey fur, and a big pink and/or black nose. They have sharp claws which help them to climb.

Koalas' also have finger prints which look the same as human finger prints. Finger print experts have had difficulty in being able to tell if the prints are from a human or koala.

Finger prints are rare among mammals that climb trees. Scientists do not know why the koala has them, but their best guess is that it helps the koala select leaves to eat. 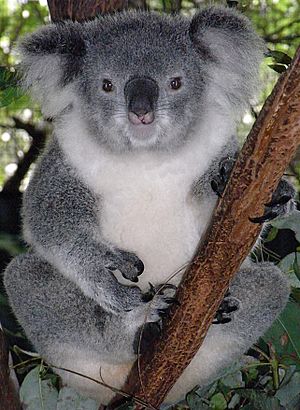 Koalas are mostly active at night. They live in trees and are rarely found on the ground. They eat leaves of Eucalyptus trees. Koalas do not drink often, they get most of their water from the Eucalyptus leaves.

Koalas live alone most of the time, but they have a social hierarchy with the other koalas who live near.

Because they get so little energy from their diet, koalas must limit their energy use and sleep or rest 20 hours a day; only 4 hours a day are spent in active movement. They are predominantly active at night and spend most of their waking hours feeding. They typically eat and sleep in the same tree, possibly for as long as a day.

On warm days, a koala may rest with its back against a branch or lie on its stomach or back with its limbs dangling. During cold, wet periods, it curls itself into a tight ball to conserve energy. On windy days, a koala finds a lower, thicker branch on which to rest. While it spends most of the time in the tree, the animal descends to the ground to move to another tree, walking on all fours. 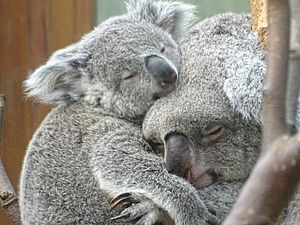 The koala usually grooms itself with its hindpaws, but sometimes uses its forepaws or mouth.

After a pregnancy of 35 days, the newly born koala is about a quarter of an inch long, and is born with no ears, eyes, or hair. It crawls into its mothers pouch on its own. After 12 months the young koala is old enough that it does not go into its mother's pouch or need milk anymore. The female koala can have another baby then. 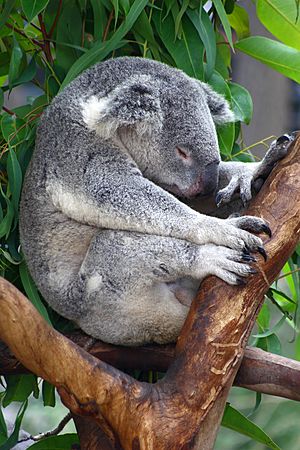 Koalas may live from 13 to 18 years in the wild. While female koalas usually live this long, males may die sooner because of their more hazardous lives. Koalas usually survive falls from trees and immediately climb back up, but injuries and deaths from falls do occur, particularly in inexperienced young and fighting males. Around six years of age, the koala's chewing teeth begin to wear down and their chewing efficiency decreases. Eventually, the cusps disappear completely and the animal will die of starvation.

Koalas have few predators; dingos and large pythons may prey on them; birds of prey (such as powerful owls and wedge-tailed eagles) are threats to young. Koalas are generally not subject to external parasites, other than ticks in coastal areas. Internal parasites are few and largely harmless. 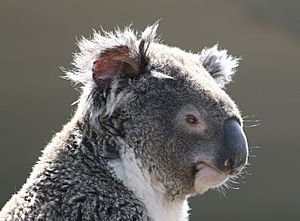 Koalas can be subject to pathogens such as Chlamydiaceae bacteria, which can cause keratoconjunctivitis, urinary tract infection, and reproductive tract infection. Such infections are widespread on the mainland, but absent in some island populations. The koala retrovirus (KoRV) may cause koala immune deficiency syndrome (KIDS) which is similar to AIDS in humans. Prevalence of KoRV in koala populations suggests a trend spreading from the north to the south of Australia. Northern populations are completely infected, while some southern populations (including Kangaroo Island) are free.

The animals are vulnerable to bushfires due to their slow movements and the flammability of eucalyptus trees. The koala instinctively seeks refuge in the higher branches, where it is vulnerable to intense heat and flames. Bushfires also fragment the animal's habitat, which restricts their movement and leads to population decline and loss of genetic diversity. 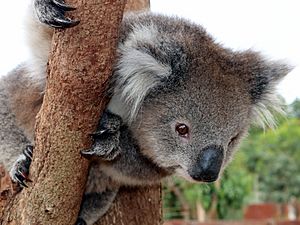 Dehydration and overheating can also prove fatal. Consequently, the koala is vulnerable to the effects of climate change. Droughts also affect the koala's well-being. For example, a severe drought in 1980 caused many Eucalyptus trees to lose their leaves. Subsequently, 63% of the population in southwestern Queensland died and recovery of the population was slow.

Later, this population declined from an estimated mean population of 59,000 in 1995 to 11,600 in 2009, a reduction attributed largely to hotter and drier conditions resulting from droughts in most years between 2002 and 2007. Another predicted negative outcome of climate change is the effect of elevations in atmospheric CO2 levels on the koala's food supply: increases in CO2 cause Eucalyptus trees to reduce protein and increase tannin concentrations in their leaves, reducing the quality of the food source. 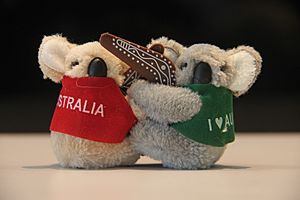 The koala is well known worldwide and is a major draw for Australian zoos and wildlife parks. It has been featured in advertisements, games, cartoons, and as soft toys. It benefited the national tourism industry by over an estimated billion Australian dollars in 1998, a figure that has since grown. In 1997, half of visitors to Australia, especially those from Korea, Japan, and Taiwan, sought out zoos and wildlife parks; about 75% of European and Japanese tourists placed the koala at the top of their list of animals to see.

Early European settlers in Australia considered the koala to be a prowling sloth-like animal with a "fierce and menacing look". At the beginning of the 20th century, the koala's reputation took a more positive turn, largely due to its growing popularity and depiction in several widely circulated children's stories. Perhaps the most famous fictional koala is Blinky Bill. Created by Dorothy Wall in 1933, the character appeared in several books and has been the subject of films, TV series, merchandise, and a 1986 environmental song by John Williamson. 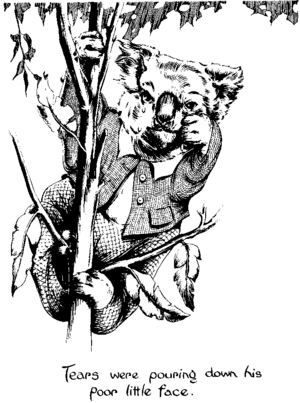 The first Australian stamp featuring a koala was issued by the Commonwealth in 1930. A television ad campaign for Australia's national airline Qantas, starting in 1967 and running for several decades, featured a live koala (voiced by Howard Morris). The series has been ranked among the greatest commercials of all time.

The song "Ode to a Koala Bear" appears on the B-side of the 1983 Paul McCartney/Michael Jackson duet single Say Say Say. A koala is the main character in Hanna-Barbera's The Kwicky Koala Show and Nippon Animation's Noozles, both of which were animated cartoons of the early 1980s. 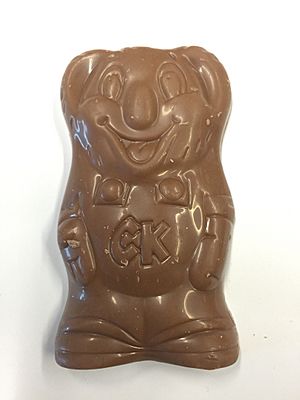 Food products shaped like the koala include the Caramello Koala chocolate bar and the bite-sized cookie snack Koala's March. Dadswells Bridge in Victoria features a tourist complex shaped like a giant koala, and the Queensland Reds rugby team has a koala as its mascot. The Platinum Koala coin features the animal on the reverse and Elizabeth II on the obverse.

The drop bear is an imaginary creature in contemporary Australian folklore featuring a predatory, carnivorous version of the koala. This hoax animal is commonly spoken about in tall tales designed to scare tourists.

While koalas are typically docile herbivores, drop bears are described as unusually large and vicious marsupials that inhabit treetops and attack unsuspecting people (or other prey) that walk beneath them by dropping onto their heads from above.

All content from Kiddle encyclopedia articles (including the article images and facts) can be freely used under Attribution-ShareAlike license, unless stated otherwise. Cite this article:
Koala Facts for Kids. Kiddle Encyclopedia.