Postage stamps and postal history of Australia facts for kids 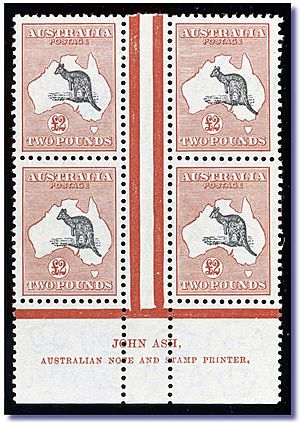 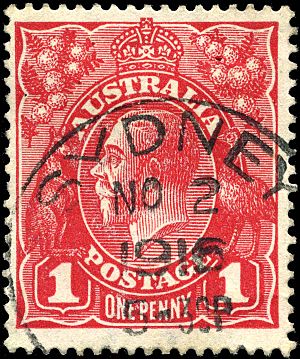 This is an overview of the postage stamps and postal history of Australia.

The Commonwealth's Postmaster-General's Department became effective on 1 March 1901 (this agency would be disaggregated on 1 July 1975 in part into the Australian Postal Commission trading as Australia Post). All then-current colony stamps which continued on sale became de facto Commonwealth stamps. Some of these stamps continued to be used for some time following the introduction in 1913 of the Commonwealth's uniform postage stamp series. These stamps continued to be valid for postage until 14 February 1966 when the introduction of decimal currency made all stamps bearing the earlier currency invalid for use.

Circumstances precluded the immediate issue of a uniform postage stamp series for the new Commonwealth. But there was no hindrance in respect to a Postage Due series. The first of these, the design of which was based on the current New South Wales postage due stamps, was issued in July 1902.

Postal rates became uniform between the new States on 1 May 1911 because of the extension of the United Kingdom domestic postal rate of 1d per half ounce (Imperial Penny Post) to Australia as a member of the British Empire. One penny became the uniform domestic postage rate. One penny postcards and lettercards also appeared in 1911. In the same year, the Postmaster-General's Department held a Stamp Design Competition for a uniform series of Commonwealth postage stamps. This competition attracted over one thousand entries. 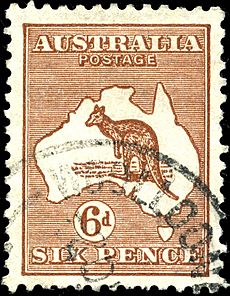 For most, Australian philately proper begins on 2 January 1913 with the issue of a red 1d (one penny) Kangaroo and Map, the design of which was adopted in part from the entry that won the Stamp Design Competition. This was the first definitive stamp with the sole nomenclature “Australia”.

The first definitive issue had fifteen stamps ranging in value from ½d (halfpenny) to £2 (two pounds). The Kangaroo and Map design was ordered by the Fisher Labor Government, which had in its ranks a number of pro-republicans who strenuously opposed the incorporation of the monarch's profile on Australian stamps. One of the first acts of the Cook Liberal Government, sworn in on 14 June 1913, was to order a series of postage stamps with the profile of George V. On 8 December 1913 the first of these, an engraved 1d carmine-red, appeared. Soon after, typographed values of the design ranging from ½d (halfpenny) to 1/4d (one shilling and four pence) appeared. The Postmaster-General's Department then went on to keep both basic designs on issue – 38 years for the Kangaroo and Map design and 23 years for the George V.

The last base domestic letter rate definitive stamp featuring the monarch appeared on 1 October 1971. Since then, the designs of all Australian definitive values have focused on fauna, flora, reptiles, butterflies, marine life, gemstones, paintings, handicrafts, visual arts, community and the like. From 1980, a stamp has been issued annually to commemorate the monarch's birthday. 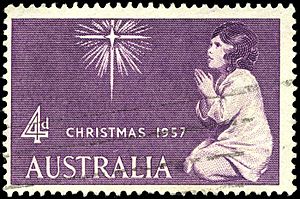 There have been many special issues. The first Christmas stamp appeared on 6 November 1957. In recent years, designs for the Christmas issue have alternated each year between the religious and the secular. From 1993, in October of every year, Australia Post has commemorated Stamp Collecting month with special issues, typically featuring topics that are of interest to children such as pets, native fauna and space. Commencing with the 2000 Sydney Olympic Games, during the Summer and Winter Olympic Games, stamps featuring Australians who have won an Olympic gold medal are issued on the next postal business day after the achievement.

Australia's first airmail-designated stamp appeared on 20 May 1929. A special 3d (three pence) airmail stamp was available for mail sent on the Perth-Adelaide air service. The cost of this service was 3d per ½ oz plus normal postage. On 19 March 1931 and 4 November 1931, a further two airmail-designated stamps, both 6d (sixpence), appeared. After these, general definitives were used for mail sent by air.

Coin-operated vending machines were introduced in 1960 and have continued in various forms to the present day. These included Frama vending machines stamps, first issued in 1984 and discontinued in 2003, as well as various booklets. Booklet stamps were discontinued in 1973 but were reintroduced some years later. Stamp booklets were available from Advance Bank ATMs from 1984 until the bank's merger with St George Bank in 1996. These were Australia's first (and, to date, only) triangular stamp issue.

Prior to 1997, the only living persons to appear on stamps were the reigning monarch and other members of the British Royal Family. Since 1997, Australia Post has issued stamps commemorating living Australians. In particular, an annual Australian Legends issue has commemorated living Australians who have made some significant contribution during their lives.

Stamps with personalized tabs were introduced in 1999. Australia Post has also used tabs to commemorate themes and individuals not considered significant enough for a stamp issue of their own.

Since the introduction of the Goods and Services Tax, separate stamps were introduced for domestic and international postage in 2001. Stamps inscribed "International Post" are not valid for domestic postage. Domestic stamps can be used for overseas postage but contribute less than face value towards the postage (the user must deduct the tax component).

From the 1913 to 1930, Commonwealth and State Government agencies used stamps (perfins) punctured with OS (“Official Service”). In 1931 the puncturing system was abandoned and stamps for government mail were overprinted OS. In February 1933, it was decided that government mail would no longer require postage stamps. The exception to OS stamps being restricted for the use of government agencies was the 4 November 1931 6d airmail stamp. The OS overprinted stamp was sold over post office counters to prevent speculation and was valid for all types of mail.

Each Australian external territory has a specific postal and philatelic history.

The Territory of Papua, officially a British colony but administered by Australia, issued its own stamps from 1901. before this, it had used Queensland stamps. Stamps of Australia were issued there between 1945 and 1953 in the new Territory of Papua and New Guinea.

Transferred from Singapore to Australia by the United Kingdom in the 1950s, Christmas Island and Cocos (Keeling) Islands were progressively and separately integrated into the Australian postal system and losing their postal and philatelic independence in the 1990s. While Christmas Island had issued its own stamps and independence since 1958, the Cocos Islands used stamps of Australia from 1952 until its postal independence in 1979. The first Cocos stamps were issued in 1963.

Both territories lost their postal independence to Australia Post in 1993 for Christmas Island and 1994 for the Cocos Islands. Consequently, their stamps became valid within Australia and stamps of Australia became valid in the islands.

The Australian Antarctic Territory had always been using stamps of Australia but disposed of its stamps since 27 March 1957. They are valid for postage within Australia.

With military operations during World War I, Australia occupied two former German colonies, German New Guinea and Nauru from the German Marshall Islands. Stamps of the German colonies and of the United Kingdom were overprinted. In the 1920s, Australia issued stamps in the name of these two territories as part of its obligations to these League of Nations mandates. After the Japanese occupation of Nauru and New Guinea, stamps of Australia were used late 1945 until reprints of the last Nauru series were available.

In the Territories of Papua and the mandate of New Guinea, stamps of Australia were valid between 1945 and 1953. United, the new Territory of Papua and New Guinea received its own stamps from Australia until its independence in 1975.

Between October 1946 and February 1949, in occupied Japan, the Australian stamps used as such by the military post offices were overprinted "B.C.O.F. / JAPAN / 1946" to avoid speculation on the currency value.

All content from Kiddle encyclopedia articles (including the article images and facts) can be freely used under Attribution-ShareAlike license, unless stated otherwise. Cite this article:
Postage stamps and postal history of Australia Facts for Kids. Kiddle Encyclopedia.