Woolloongabba is a suburb in the City of Brisbane, Queensland, Australia. In the 2016 census, Woolloongabba had a population of 5,631 people.

Experts are divided regarding the Aboriginal meaning of the name, preferring either 'whirling waters' (woolloon and capemm) or 'fight talk place' (woolloon and gabba).

Because the area was low-lying and swampy, it was known as the One Mile Swamp. Although this name appears to be unofficial, it was in common use until the early 1890s. 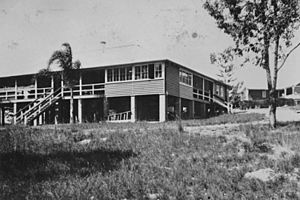 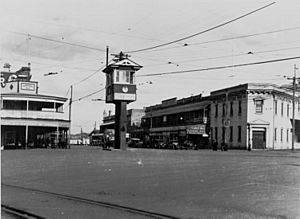 The suburb has a significant link to the history of transport in Brisbane. Between 1884 and 1969 the main railway locomotive depot for lines south of the Brisbane River was beside Stanley St. It was reached via a line that ran beside Stanley St, then crossing it, Logan Road and Ipswich Road to the main line at Dutton Park. By the 1960s services from the depot were causing significant delays to traffic as they crossed these three major roads.

The suburb was served by horse-drawn trams from 1885 to 1897, which were replaced by electric trams, which in turn ceased operation on 13 April 1969. All but one of Brisbane's trolleybus routes traversed the suburb, from 1953 to 1969. The Woolloongabba Fiveways (the intersection of Stanley Street, Main Street, Logan Road and Ipswich Road) was a complex junction with tram and railway lines, and tram and trolleybus overhead. Trams were controlled by a signalman, who operated the points (or switches) from a signal cabin near the eastern side of the junction. Trains were escorted across the junction by a flagman. Curiously, Queensland Railways always referred to the branch line as the Wooloongabba Branch, spelt with only one 'l'.

From 1927 until 1969 the largest of the Brisbane City Council's tram depots was on Ipswich Road, opposite the Princess Alexandra Hospital. It was also used by the council's buses.

In early 1942 the first Coca-Cola bottling plant in Australia was built in Woolloongabba at 36-39 Balaclava Street. It was originally designed to supply the demands of the newly arrived US military personnel, but later expanded production to the local Australian market. 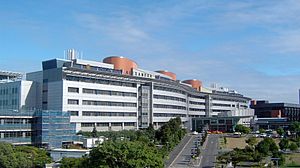 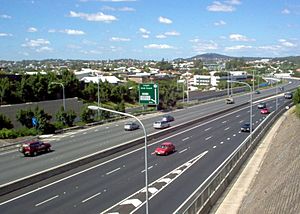 The suburb is home to the Brisbane Cricket Ground known as "The Gabba", and the Princess Alexandra Hospital. Woolloongabba has many apartment buildings due to river views, and the suburb's proximity to the Brisbane central business district and South Bank Parklands. The Norman Hotel is a local landmark that has served customers since 1890. The head office of the Queensland Justices Assosciation is located in Woolloongabba.

Woolloongabba has a number of heritage-listed sites, including:

The suburb is home to the Brisbane Cricket Ground known as "the Gabba".

The Pacific Motorway cuts through the suburb with an exit south into Vulture Street and a Stanley Street exit for vehicles heading north. Additionally, there is an entrance to the Clem Jones Tunnel in the suburb on Ipswich road.

There is a major taxi depot in Woolloongabba.

Woolloongabba also has an Institute American College (Brisbane) for Vocational Training and Management courses that is located at logan road.

All content from Kiddle encyclopedia articles (including the article images and facts) can be freely used under Attribution-ShareAlike license, unless stated otherwise. Cite this article:
Woolloongabba Facts for Kids. Kiddle Encyclopedia.