Greenslopes is a suburb in the City of Brisbane, Queensland, Australia. In the 2016 census Greenslopes had a population of 8,936 people.

It is 6.0 kilometres (3.7 mi) by road south-east of the Brisbane GPO and is mostly residential with some commercial and light industrial areas.

Greenslopes was named after an early estate in the area. The estate was owned by Frederick Wecker, who purchased the land in 1857 and named it after the area's green pastures. 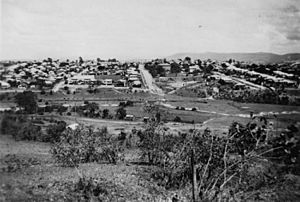 Parts of the current suburb were originally opened for settlement under names such as the Dunellan, Thompson and Mount Pleasant Estates. There is still a Dunellan Street in the suburb, adjacent to the state school.

Greenslopes formed part of Stephens Shire until its amalgamation with over 20 other local shires into Greater Brisbane in 1925. The shire's name can still be seen on a plaque on the bridge where Juliette Street crosses Norman Creek.

The Brisbane City Council operated trams along Logan Road, through Greenslopes until 13 April 1969. Until 1957 a tram line also operated along Chatsworth Road, branching off the Logan Road line at Greenslopes.

Many of the dwellings in the suburb of Greenslopes are 'character homes' of pre-war construction. Brisbane City Council purportedly recognises pre-war homes as being valuable to the identity of the suburb and enforces controls relating to the demolition and renovation of the original homes, whilst also ensuring that any new dwellings built in the suburb are reflective of traditional architecture and maintain and enhance the character of the streetscape. However, two- and three-story walk-up apartment buildings are increasingly the norm.

Before August 2015, Greenslopes was in Holland Park Ward but from August 2015 it is in the new Coorparoo Ward with Annerley, Coorparoo, Camp Hill and Carina Heights.

Greenslopes lies 5 kilometres (3.1 mi) south-east of the Brisbane central business district. There is some slight variety in the terrain, with low hills in the east and south sloping down to the flood plain of Norman Creek, which curls around the western and northern edges of the suburb on its way to join the Brisbane River at Norman Park.

The major roads are:

The 2011 Census recorded 8,565 residents in Greenslopes, of whom 50.8% were female and 49.2% were male. The median age of the population was 32; five years younger than the Australian median. 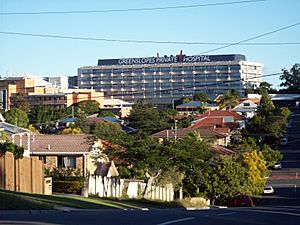 The local shopping precinct is Greenslopes Mall on Logan Road. The Greenslopes Private Hospital, formerly Repatriation General Hospital (RGH) Greenslopes operated by the Commonwealth Government Dept of Veterans Affairs (DVA) for war veterans is located within the suburb. The hospital, surrounded by quiet streets, lies some distance from the nearest main roads, a factor which has caused friction with local residents over traffic, parking and redevelopment issues in recent years.

Other longstanding local landmarks are the Greenslopes State School and Greenslopes Bowls Club.

The Australian Institute of Applied Sciences AIAS College of Natural Medicine is the most notable educational institution in the area. Located on Beata St, the AIAS College is a major contributor, through its large number of on campus students, to the economic development of Stones Corner. 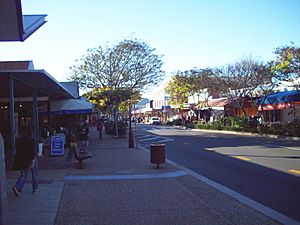 Logan Road, Stones Corner, a precinct notable for Iraqi and other Middle Eastern cafes, butcher shops and other services, factory outlets and its Middle Eastern and Northeast African population.

Stones Corner is a Greenslopes locality (formerly a separately designated suburb) known for its assortment of ethnic communities, ethnic retail food outlets and several sidewalk restaurants and cafés — Italian, Indian, Turkish and others — located on Logan Road near where it crosses Norman Creek.

The community is notable for its factory outlets and its longstanding large population of Indians, Iraqis and other Middle Easterners, Somali and other Northeast Africans and more recently, Punjabis, particularly of Sikh religious affiliation, who have flowed into the community as a result of recent changes in federal immigration policy.

Greenslopes has a number of heritage-listed sites, including:

All content from Kiddle encyclopedia articles (including the article images and facts) can be freely used under Attribution-ShareAlike license, unless stated otherwise. Cite this article:
Greenslopes, Queensland Facts for Kids. Kiddle Encyclopedia.