Yeronga is a southern riverside suburb in the City of Brisbane, Queensland, Australia. In the 2016 census, Yeronga had a population of 6,535 people.

The name Yeronga is thought to be either derived from the Aboriginal words yarung (meaning sandy or gravelly) and ba (meaning place), or that it derives from the name of the house Yerong-lea, the residence of Charles Hardie Buzacott.

The first inhabitants of the Yeronga area were the Jagera people, whose traditional country is the south side of the Brisbane River.

In 1823 the first Europeans passed through the Brisbane region, being the former convicts, then timber getters, Thomas Pamphlett, John Finnigan and Richard Parsons. Their journey around the Moreton Bay area following being blown off course by a cyclone is an epic story in itself. Suffice to say that in their attempt to walk north along the coastline to Sydney (they thought the cyclone had pushed their boat south of Sydney) they followed the south bank of the Brisbane River (around May 1823) upstream through Yeronga to Oxley Creek (originally named Canoe Creek), where they found a bark canoe and used it to travel further north. The present Pamphlett Bridge at that spot honours the member of the party who could swim, as the canoe was on the west bank of the creek.

The explorer John Oxley sailed into Moreton Bay in November 1823 but didn’t see the entrance to the Brisbane River due to the extensive mangrove forest there at the time. He then sailed north and encountered Pamphlett and Finnegan around Bribie Island (Parsons had continued north to the Noosa area). Finnegan then guided Oxley to the entrance of the river, where he sailed upstream as far as Goodna. Thus whilst Oxley is traditionally credited with the discovery of the Brisbane River (and Canoe Creek was renamed in his honour), but for his encounter with Pamphlett and Finnegan he may never have known it was there.

Following the establishment of the Moreton Bay Penal Colony at the site of what is now the Brisbane central business district in 1825, and the opening up of the area to free settlers in 1842, European settlement spread from that site.

The first recorded land sale occurred in 1854, with 154 acres (~62 hectares) being purchased by Edward Cooke and TLM Prior. Being part of NSW at that stage, the contract was sent to Sydney and has not been located. After Queensland became a separate colony in 1859, a second land sale of 100 acres (~40ha) occurred in 1861. When local government was established, Yeronga became part of the Stephens Shire Council area. This and other councils amalgamated to form the Brisbane City Council in 1925.

Yeronga was originally used for agricultural purposes, and dairy farms were established, especially on the fertile riverside and adjacent floodplains. Crops recorded as grown in the area were cotton, sugar, maize, potatoes and arrowroot. Urban residential settlement first occurred along Fairfield Road, and especially around Station Avenue (now Kadumba St) once the railway opened.

A small coal mine was established near Newcastle St but appears to have been quickly mined out.

The last farm in Yeronga was subdivided for residential use in the mid 1950s, and part of the north side of Hyde Rd became a light industrial area with the opening of the Taubmans (later Akzo Nobel) paint factory in 1952. A Sunbeam electrical appliances factory was later established on the corner of Hyde Rd and Cansdale St, and a warehouse and timber yard west of the paint factory. All have now closed, and the area is subject to a planning study to determine future (likely residential) redevelopment plans.

There were a series of lagoons adjacent to the river, and these were initially used as rubbish tips for the expanding area. Once the lagoons were filled, they were topped with clay and became parks. This explains the relatively large area of parkland, sports fields and open space adjacent to the river in Yeronga today.

The median age of the Yeronga population was 34 years, 3 years below the Australian median.

Yeronga has a number of heritage-listed sites, including: 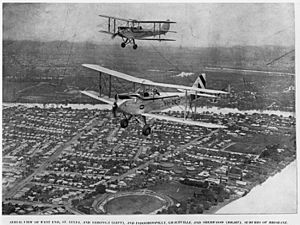 Gypsy Moths over West End, Davies Park oval below, Yeronga is to the left of the top wing of the front aircraft, 1933

Yeronga railway station on the Beenleigh line provides access (travelling south) to Beenleigh (and with a change of train, the Gold Coast) and (travelling north) Ferny Grove via the Brisbane central business district.

The opening of the railway from Corinda to the South Brisbane river wharves in June 1884 gave Yeronga improved access to the city (via the Victoria Bridge) and surrounding areas. The extension of the line to South Brisbane in 1891, and the connecting tram service, further improved access to the city. The opening of the Merivale Bridge in 1978 enabled trains to connect to Roma Street, Central and other city stations, though many people travelling to the south end of the City still detrain at South Bank station and walk over the Goodwill Bridge (pedestrian & bicycle only), or at South Brisbane station to walk or catch a bus over the Victoria Bridge. The railway through Yeronga was electrified in 1984, at which time a 30-minute service frequency was introduced. This increased to 15-minute frequency on 20 January 2014.

There are also two bus services that travel through the suburb, to the city and Indooroopilly.

Upon its creation the Brisbane City Council (BCC) became responsible for tram, and then bus public transport in its area. One of the first BCC bus routes was provided to Yeronga in 1940, known then as Route 7. This service to the City continues to be provided, known today as the Route 107. The Route 105 bus now provides an additional service to Indooroopilly.

In the mid 1980s Yeronga had two other neighbourhood shopping strips, one on the corner of Orsova and Orontes Roads, and the other on Anita Street. The Orsova Road shops included the Yeronga West Post Office, a pharmacy, butcher, convenience store, hair dresser and real estate agent. The Anita Street shops included a convenience store, fruit and vegetable store, butcher and a Swiss restaurant. The Anita St shops have since been demolished and replaced with houses, whilst the Orsova Rd shops are now used as the Brisbane office of Little Athletics, a cafe and a financial planner's office.

The former Strophair's auction/retail complex on the corner of Venner Road and Cansdale Street has been redeveloped as a retirement village.

Parts of Yeronga were inundated during Brisbane's 2011 floods.

The major flood events of the Brisbane River in 1887, 1890, 1893, 1907 and 1931 are not recorded as causing significant damage to Yeronga (the flood-prone areas of which were not extensively developed at those times), but the 1974 and 2011 floods caused extensive damage to many of the properties adjacent to the river and built in low-lying parts of the suburb. At the peak of these floods Hyde Road was blocked and Kadumba Street (which is built on a ridgeline) was the only major access to the western part of the suburb.

All content from Kiddle encyclopedia articles (including the article images and facts) can be freely used under Attribution-ShareAlike license, unless stated otherwise. Cite this article:
Yeronga, Queensland Facts for Kids. Kiddle Encyclopedia.