Jørn Oberg Utzon, Hon. FAIA, (9 April 1918 – 29 November 2008) was a Danish architect, most notable for designing the Sydney Opera House in Australia. When it was declared a World Heritage Site on 28 June 2007, Utzon became only the second person to have received such recognition for one of his works during his lifetime, after Oscar Niemeyer. Other noteworthy works include Bagsværd Church near Copenhagen and the National Assembly Building in Kuwait. He also made important contributions to housing design, especially with his Kingo Houses near Helsingør.

Utzon was born in Copenhagen, the son of a naval architect, and grew up in Aalborg, Denmark, where he became interested in ships and a possible naval career. As a result of his family's interest in art, from 1937 he attended the Royal Danish Academy of Fine Arts where he studied under Kay Fisker and Steen Eiler Rasmussen. Following his graduation in 1942, he joined Gunnar Asplund in Stockholm where he worked together with Arne Jacobsen and Poul Henningsen. He took a particular interest in the works of American architect Frank Lloyd Wright. After the end of World War II and the German Occupation of Denmark, he returned to Copenhagen.

In 1946 he visited Alvar Aalto in Helsinki. In 1947–48 he travelled in Europe, in 1948 he went to Morocco where he was taken by the tall clay buildings. In 1949, he travelled to the United States and Mexico, where the pyramids provided further inspiration. Fascinated by the way the Mayans built towards the sky to get closer to God, he commented that his time in Mexico was "One of the greatest architectural experiences in my life."

In America, he visited Frank Lloyd Wright's home, Taliesin West, in the Arizona desert and met Charles and Ray Eames. In 1950 he established his own studio in Copenhagen and, in 1952, built an open-plan house for himself, the first of its kind in Denmark. In 1957, he travelled first to China (where he was particularly interested in the Chinese desire for harmony), Japan (where he learnt much about the interaction between interiors and exteriors) and India, before arriving in Australia in 1957 where he stayed until 1966. All this contributed to Utzon's understanding of factors which contribute to successful architectural design.

Utzon had a Nordic sense of concern for nature which, in his design, emphasized the synthesis of form, material and function for social values. His fascination with the architectural legacies of the ancient Mayas, the Islamic world, China and Japan enhanced his vision. This developed into what Utzon later referred to as Additive Architecture, comparing his approach to the growth patterns of nature.

In 1957, Utzon unexpectedly won the competition to design the Sydney Opera House. His submission was one of 233 designs from 32 countries, many of them from the most famous architects of the day. Although he had won six other architectural competitions previously, the Opera House was his first non-domestic project.

The designs Utzon submitted were little more than preliminary drawings. Concerned that delays would lead to lack of public support, the Cahill government of New South Wales nonetheless gave the go-ahead for work to begin in 1958.

The extraordinary structure of the shells themselves represented a puzzle for the engineers. This was not resolved until 1961, when Utzon himself finally came up with the solution. He replaced the original elliptical shells with a design based on complex sections of a sphere. Utzon says his design was inspired by the simple act of peeling an orange: the 14 shells of the building, if combined, would form a perfect sphere. Although Utzon had spectacular, innovative plans for the interior of these halls, he was unable to realise this part of his design. In mid-1965, the New South Wales Liberal government of Robert Askin was elected. 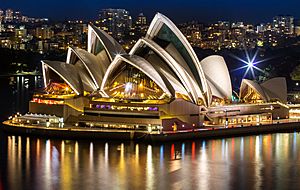 Utzon soon found himself in conflict with the new Minister. Attempting to rein in the escalating cost of the project, Hughes began questioning Utzon's capability, his designs, schedules and cost estimates, refusing to pay running costs. In 1966, after a final request from Utzon that plywood manufacturer Ralph Symonds should be one of the suppliers for the roof structure was refused, he resigned from the job, closed his Sydney office and vowed never to return to Australia. When Utzon left, the shells were almost complete, and costs amounted to $22.9 million. Following major changes to the original plans for the interiors, costs finally rose to $103 million.

The Opera House was finally completed, and opened in 1973 by Elizabeth II, Queen of Australia. The architect was not invited to the ceremony, nor was his name even mentioned during any of the speeches. He was, however, to be recognised later when he was asked to design updates to the interior of the opera house. The Utzon Room, overlooking Sydney Harbour, was officially dedicated in October 2004. 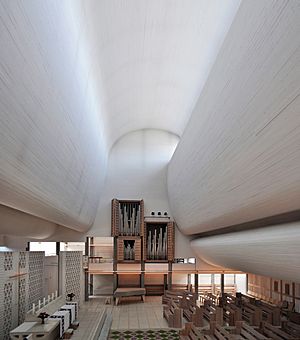 While some of Utzon's most notable works are spread around the globe, he completed a number of projects in his native Denmark. Bagsværd Church, just north of Copenhagen, is considered to be a masterpiece of contemporary church architecture, thanks to its bright, naturally illuminated interior and its ceiling with softly-rounded vaulting. Designed in 1968, the church was completed in 1976.

The Kingo Houses in Helsingør (1958) consist of 63 L-shaped homes based on the design of traditional Danish farmhouses with central courtyards. Built in rows following the undulations of the site, each of the houses not only has a view of its own but enjoys the best possible conditions for sunlight and shelter from the wind.

A few years later, he went on to design the Fredensborg Houses (1963) for Danish pensioners who had worked for long periods abroad. Located on a site in natural surroundings and inspired by housing in Beijing's Forbidden City, the complex consists of 47 courtyard homes and 30 terraced houses as well as a central building with a restaurant, meeting rooms and nine guest rooms. The homes are located around a square in groups of three, all with entrances from the square.

His Paustian Furniture Store (1988) on Copenhagen's waterfront stands on a multitude of columns inspired by a beech forest. A temple-like finish is achieved by 11 columns with fan-shaped capitals overlooking the harbour. Similar columns are also present inside the spacious interior, stretching up to the skylight dominating the roof. 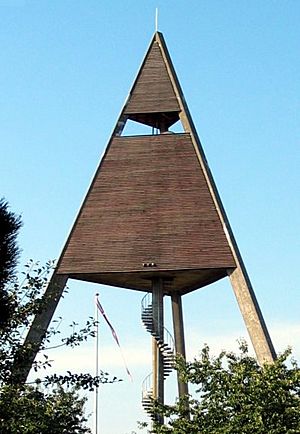 In 2005, in close collaboration with his son Kim Utzon, he helped to plan the Utzon Center in Aalborg (completed 2008) designed to inspire young students of architecture. Located on the waterfront, its high sculptured roofs rise over an auditorium, a boathall and a library while the lower roofs of its exhibition rooms and workshops surround a central courtyard, sheltered from the wind.

Kuwait's National Assembly Building, completed in 1982, stands on the sea front. Benefiting from an understanding of Islamic architecture, Utzon designed a building consisting of a covered square, a parliamentary chamber, a conference hall, and a mosque. Its waving roof conveys the impression of moving fabric. Its columns are reminiscent of the Karnak temples.

The Melli Bank building in Tehran, slightly set back from the lines of the busy street where it stands, has a reinforced concrete frame faced with natural stone. The ground-level banking hall, naturally illuminated by skylight vaults, is connected to the upper floor by a central spiral staircase, providing maximum flexibility of space. 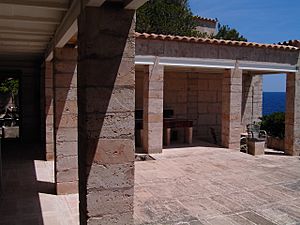 On his return from Australia in 1966, Utzon made a stop on Mallorca. Fascinated by the island, he decided to build a summer house there on the top of a cliff near the fishing village of Portopetro. Named Can Lis after his wife, the house was based on the home he had intended to build in Australia but was inspired by local materials and climate, setting standards for contemporary Mediterranean architecture. The house consists of five loosely linked blocks with a colonnaded outdoor area, a living room and two bedrooms, each with its own courtyard.

Although Utzon and his wife spent an increasing amount of time on Mallorca, they became disturbed by all the tourists who came to see their home. They decided to move to a more remote area in the mountains where they built a second house known as Can Feliz, consisting of three blocks for dining, living and sleeping, separated by courtyards. The upper part of the grand theatrical living space is furnished for working with heavy timber bookcases and a large table. A huge window provides magnificent views of the pine forests and the sea beyond.

The Utzon Center in Aalborg, designed together with his son Kim, was the architect's last assignment. In 2005 he commented, "From the bottom of my heart, I hope that the Utzon Center will be a place where positive thoughts converge and where students from the School of Architecture gather when they want to get together to discuss their ideas. It is intended to be a power centre for the architects and people of the future."

Utzon died in Copenhagen on 29 November 2008, aged 90, of a heart attack in his sleep after a series of operations. On 2 December 2008 the Parliament of New South Wales passed a special motion of condolence to honour Utzon's life and work.

He was survived by his wife, Lis, his sons Jan and Kim, his daughter Lin, and several grandchildren. His sons are trained architects and his daughter is a designer, muralist and artist who was at one time married to the Australian architect Alex Popov.

All content from Kiddle encyclopedia articles (including the article images and facts) can be freely used under Attribution-ShareAlike license, unless stated otherwise. Cite this article:
Jørn Utzon Facts for Kids. Kiddle Encyclopedia.