Yeerongpilly is a suburb of Brisbane, Australia. It is eight km south of the Brisbane central business district. The suburb had a population of 1,984 at the 2011 Australian census. It has a large Asian population and a growing Sub-Saharan African population.

Yeerongpilly is derived from the Aboriginal words "yarung" meaning sandy or gravelly or "yurong" meaning rain and "pilly" meaning gully or watercourse. Yeerongpilly grew from an area named Boggo, which was logged for timber for Brisbane.

A small section of the north eastern boundary runs along Ipswich Road.

The median age of the Yeerongpilly population was 33 years, 4 years below the Australian median. 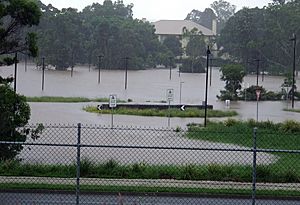 The suburb doesn't directly front the Brisbane River, however a small section of the western boundary follows Oxley Creek. Parts of Yeerongpilly were affected by the 2010–2011 Queensland floods. Insurance claims for damage created by the flood were the second highest in the state, according to Suncorp Insurance.

The Cross River Rail is to have its southern tunnel in the suburb. A number of properties are to be resumed once the project get final approval.

Yeerongpilly has a number of heritage-listed sites, including:

All content from Kiddle encyclopedia articles (including the article images and facts) can be freely used under Attribution-ShareAlike license, unless stated otherwise. Cite this article:
Yeerongpilly, Queensland Facts for Kids. Kiddle Encyclopedia.