Tennyson is a suburb of Brisbane, Australia. It is 7 kilometres (4.3 mi) south of the CBD on the Brisbane River. At the 2011 Australian census the suburb had a population of 859.

The area was originally named Softstone by James Strong, one of the original settlers, but by 1897 the name was changed to Tennyson. Tennyson is named after the British poet Alfred Tennyson. 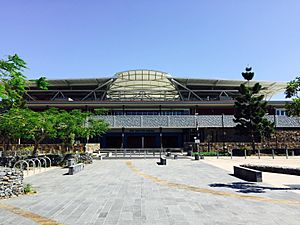 The Queensland Tennis Centre is located in Tennyson. It is built on the site of the demolished Tennyson Power Station.

Services to the Tennyson railway station were suspended in 2011, with no future plans of reopening the station for use yet. Bus services run through the suburb as a replacement to the railway.

All content from Kiddle encyclopedia articles (including the article images and facts) can be freely used under Attribution-ShareAlike license, unless stated otherwise. Cite this article:
Tennyson, Queensland Facts for Kids. Kiddle Encyclopedia.