Moorooka is a southern suburb in the City of Brisbane, Queensland, Australia. In the 2016 census, Moorooka had a population of 10,368 people.

The area was occupied by the Australian Aboriginal Jagera tribe before European settlement. The area was probably a hunting ground with plentiful food and water. There was also reportedly a Bora ring, which older residents of the area recall being shown. The word Moorooka is an indigenous word, either meaning 'iron bark', referring to the numerous iron bark trees in the area, or 'long nose', referring to Mt Toohey at the suburb's periphery. A collection of local historical records known as the Brisbane City Archives was established at Moorooka in 1859.

Moorooka has traditionally hosted a working class population stemming from its history as a manufacturing hub during World War II. The southern part of Moorooka bordering Salisbury was the location of government built returned servicemen housing. Recently Moorooka has seen immigrants from various places of the world, including people from the ex-Yugoslavia (Bosnia, Croatia, Serbia), Middle East (Iraq and Iran) and recently people from Africa (Southern Sudan and Eritrea), which has brought an influx of new families into the area.

The rail line to Robina on the Gold Coast forms the western border of the suburb. Commuter trains on the Beenleigh line stop at Moorooka railway station. 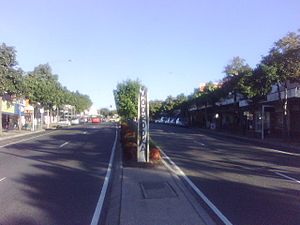 Between the 1930s and 1969, trams ran along Beaudesert Road, thence along Ipswich Road to the City. The suburb continues to be served by Brisbane Transport buses, namely the 110 Inala-City server, 116 Rocklea-Moorvale service, the 117 Acacia Ridge-City Valley Service, the 124 Sunnybank-City service, and the 125 Garden City-City Valley service. There is a zone border crossing at the Beaudesert Road shops, popularly known as Moorvale, for transport zones 2 and 3.

Moorooka has two principal churches, the St Brendan's Catholic Church at Hawtree Street (Roman Catholic), and the Church of Christ at Pampas Street and Beaudesert Road. Both feature Sunday services.

Many of the houses are pre-war Queenslanders (on posts, with simple one floor, wooden construction), with small apartment blocks scattered through the suburb. As with many older suburbs of Brisbane, Moorooka is becoming gentrified, with many older homes now being either renovated and extended or replaced by more modern buildings. There are prime real estate areas on the top of hills, with views to the Great Dividing Range over Archerfield in the south, Seventeen Mile Rocks to the west, Mount Coot-tha, St. Lucia, Indooroopilly to the north-west and the city to the north.

Moorooka is serviced by two kindergartens.

All content from Kiddle encyclopedia articles (including the article images and facts) can be freely used under Attribution-ShareAlike license, unless stated otherwise. Cite this article:
Moorooka, Queensland Facts for Kids. Kiddle Encyclopedia.