Beenleigh is a town and suburb in the City of Logan, Queensland, Australia. In the 2016 census, Beenleigh had a population of 8,252 people.

Beenleigh and adjoining suburbs are located near the confluence of the Logan and Albert rivers. The residential and urban suburb lies southwest of the Pacific Motorway after it crosses the Logan River and is crossed by the Gold Coast railway line. Logan River Parklands contains a boat ramp, barbeques and a picnic area. Whilst it was once a stand-alone town built on sugar and home to Australia's oldest rum distillery built in 1864, increasing development in South East Queensland since the 1980s has seen it enveloped by Brisbane and the Gold Coast. 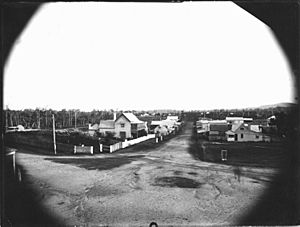 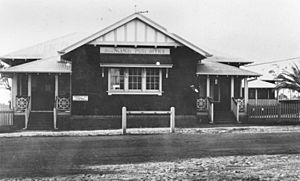 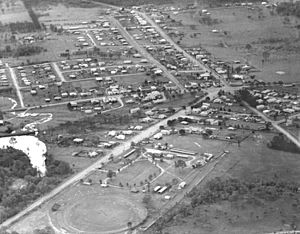 An aerial view of Beenleigh in 1954. (This is a mirror-image of the true aerial view.) 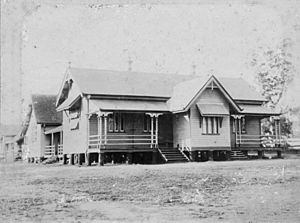 This is the Yugambeh People's country, predating European settlement by tens of thousands of years. Their Yugambeh language and heritage survive and is a testament to the Yugambeh Museum located in the town.

Beenleigh was first colonised in the 1860s, with the first permanent European settlement occurring by John Davy and Frank Gooding who named their sugar cane plantation Beenleigh in memory of their family estate in Devonshire, England. The first sugar cane mill was built in 1867 and by 1885 another 29 were operational.

Commercial dairying in the area began in 1889. Beenleigh State School was opened on 6 February 1871. 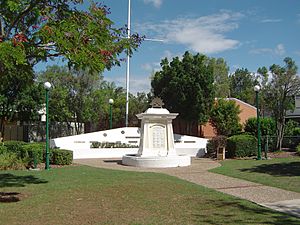 The Beenleigh Memorial Park was dedicated on 21 August 1925.

Beenleigh was the centre of the Shire of Albert, which also included the suburbs of Eagleby, Alberton, Mt Warren Park, Windaroo, Edens Landing, Holmview, Pimpama, and Jacobs Well. In 1995, Albert Shire was dissolved and Beenleigh and the surrounding suburbs were then amalgamated into City of Gold Coast. In 2008 these suburbs were transferred from Gold Coast City to City of Logan (despite protests from locals who voted against being part of Logan).

Beenleigh has a number of heritage-listed sites, including: 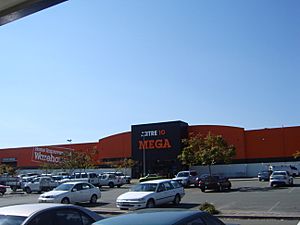 Beenleigh Mitre 10 MEGA opened in 2004 it was the company's first Australian MEGA store, it employs over 200 people.

The Beenleigh Historical Village preserves twenty historic buildings and houses a number of collections of historic material from the region. The town is also home to the Beenleigh Artisan Distillers, Australia's oldest rum distillery, Yugambeh Language and Research Centre, Poppy's Chocolates and Windaroo Organic Cottage just 5 minutes out of town.

Social events of note are the annual Rum, Rump and Rhumba Festival, Eats & Beats Food Trucks and the Beenleigh Show.

Despite its name, Beenleigh Special School is located in neighbouring Mount Warren Park.

All content from Kiddle encyclopedia articles (including the article images and facts) can be freely used under Attribution-ShareAlike license, unless stated otherwise. Cite this article:
Beenleigh, Queensland Facts for Kids. Kiddle Encyclopedia.