Loganholme is a suburb in the City of Logan, Queensland, Australia. In the 2016 census, Loganholme had a population of 6,303 people.

The majority of the land is used for houses while it has range of other uses.

The suburb is bisected by the Pacific Motorway and the Logan Motorway which aligns with a small section of the northern boundary. The southern and western boundaries of the suburb follow the Logan River. Tudor Park on Clarks Road features sports facilities. A small pocket of land by the Logan River is known as Alexander Clark Park. The park is well-facilitated and available for large groups and events such as weddings. East of the motorway is a large commercial and industrial area, adjacent to vacant flood plains. Here the largest wastewater treatment plant in the City of Logan began an upgrade process in 2014. The upgrade was needed to meet population growth in the area. In the northern tip of Loganholme, adjacent to the Logan Hyperdome is a retail district with a public hotel, Officeworks, Foodworks and Harvey Norman stores. Nearby, along Bryants Road is the Loganholme police station. 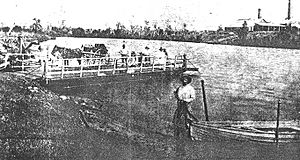 A cotton gin, which was converted to a sugar mill, was built at Loganholme in 1867. The existing ferry crossing at Loganhholme, known as the Beenleigh Ferry, established in the 1870s, was facing increased delays by the 1920s as vehicle traffic passing through the area increased dramatically. A road crossing from Loganholme to Beenleigh was opened in July 1931. The bridge here was duplicated in May 1968 and rebuilt in 1999 when the Pacific Motorway was widened.

Until 1949, Loganholme was within Shire of Tingalpa. 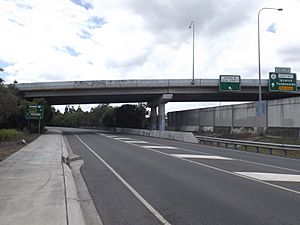 A bus interchange is located adjacent to the Logan Hyperdome. A regular bus links to both Beenleigh and Logan Central. The grade separated intersection of the two motorways was originally built in 1988.

All content from Kiddle encyclopedia articles (including the article images and facts) can be freely used under Attribution-ShareAlike license, unless stated otherwise. Cite this article:
Loganholme, Queensland Facts for Kids. Kiddle Encyclopedia.