Bethania is a suburb in the City of Logan, Queensland, Australia. In the 2016 census Bethania had a population of 5,385 people. 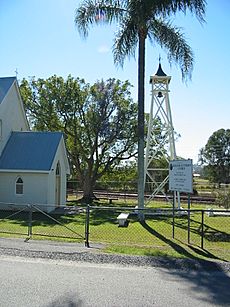 Bethania was founded by Germans during the 1860s and is home to many different nationalities. By 1866 a small township had developed. It is believed the name is derived from Bethany, the biblical village in Israel.

The first railway bridge was destroyed by flood in 1887. A new concrete, steel and timber bridge lasted until 1972 when it was replaced by a pre-stressed concrete bridge.

The suburb was affected badly by the 1974 Brisbane flood. Duck Island became part of the suburb when part of the river was silted up. Sand and gravel has been mined from the alluvial deposits in recent years.

Bethania has a number of heritage-listed sites, including:

All content from Kiddle encyclopedia articles (including the article images and facts) can be freely used under Attribution-ShareAlike license, unless stated otherwise. Cite this article:
Bethania, Queensland Facts for Kids. Kiddle Encyclopedia.