Kids Encyclopedia Facts
This page is about a suburb in Queensland, Australia. For other places called Tanah Merah, see Tanah Merah (disambiguation).

Tanah Merah is a residential suburb in the City of Logan, Queensland, Australia. In the 2016 census, Tanah Merah had a population of 4,752 people. It was originally named by the Queensland Place Names Board in 1971.

Originally this land was bought and named by the McBride's, an English family who moved to Brisbane from Penang, Malaysia. The land was the first settlement for the McBride family in Australia and subsequently named it Tenah Merah, translating to 'red soils' in Malaysian. The family were an airforce family who left Malaysia following WWII.

The land was once owned by the Murray family who sold it off in sections to developers. The Murray farm still exists in Tanah Merah and is located at the end of Murrays Road. 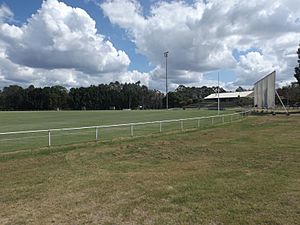 In the north west Slacks Creek joins the Logan River. It was this area which was the first to be settled by Europeans. On north east border is the Logan Hyperdome. Part of the western boundary follows lower Slacks Creek. The Pintu Drive off-ramp is the designated exit from the M1 for Tanah Merah and nearby is the Bryants Road overpass. The south eastern pocket of the suburb is positioned close to Loganholme State School. The central parts are dominated by a ridge which remains partially vegetated. This area provides habitat for wallabies and koalas. Tansey Park on the river has a boat ramp, playground, and two sports ovals. A small caravan park is located on the Pacific Highway opposite the Hyperdome. 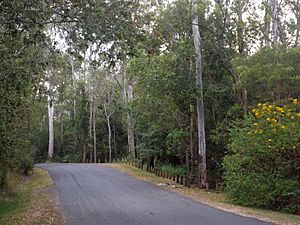 Murrays Road is a heritage road located in the suburb. Named after the Murray family who first settled in the area in the 1870s, the road (in part) is bordered by Slacks Creek and natural reserve. The original Murray farm is still located at the end of the road. It was farmed for 4 generations as a Dairy Farm (originally suppling milk to the Kingston Butter Factory. Robert (Jim) Murray was the last to operate the dairy which is now not in use.

Murrays Road also provided access to timber carriage. Logs were brought in by bullock cart from the surrounding area and transported to sawmills up the Logan River. This was done by a rafting system (steamers) which would travel up Slacks Creek. Earth cuttings can still be seen in the hill to the side of the road where logs were rolled down for removal. Rafting Court is a small a street off Murrays Road which is named to remember the important role the timber distribution point had in supplying timber to the developing area.

Murrays Road also holds the largest single population of Austromyrtus gonoclada trees. Less than 300 specimens are known to exist and many are located along the road itself as well on adjoining property (map reference) -27.661408,153.162332.

All content from Kiddle encyclopedia articles (including the article images and facts) can be freely used under Attribution-ShareAlike license, unless stated otherwise. Cite this article:
Tanah Merah, Queensland Facts for Kids. Kiddle Encyclopedia.