Meadowbrook is a mixed-use suburb in the City of Logan, Queensland, Australia. In the 2016 census, Meadowbrook had a population of 3,113 people. The Logan Hospital and a TAFE college are located in the suburb.

The suburb was formed in 1991 as a subdivision of Loganlea. The Logan Hospital was opened in 1990 and the Logan campus for Griffith University and TAFE college opened in 1998. 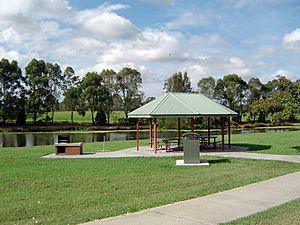 A long section of the Logan River stretching past Meadowbrook was once grazing lands. Today the flood prone area has been converted into a well-catered 10-hectare parklands. The parks entrance is in Armstrong Street. Cemented walking paths extends up Slacks Creek towards the Logan Motorway and Tanah Merah. There are two dog-off-leash sections, facilities for large groups, playground and exercise equipment.

The suburb is crossed by a number of major transport routes. These include the Logan Motorway, Loganlea railway station for both the Beenleigh railway line and Gold Coast railway line and Loganlea Road. The suburb is serviced by the 560 and 562 Translink bus services linking the suburb to Logan Central, Springwood, Browns Plains and the Logan Hyperdome. A number of bus routes services Meadowbrook and there are two established bikeways.

Problems with illegal car parking in the streets around the hospital, TAFE and train station were addressed with increased restriction of two-hour limited parking.

All content from Kiddle encyclopedia articles (including the article images and facts) can be freely used under Attribution-ShareAlike license, unless stated otherwise. Cite this article:
Meadowbrook, Queensland Facts for Kids. Kiddle Encyclopedia.