Bethania Lutheran Heritage Church is a heritage-listed church at Church Road, Bethania, City of Logan, Queensland, Australia. It was built in 1872 and is the oldest Lutheran church in Queensland. It was added to the Queensland Heritage Register on 21 October 1992. 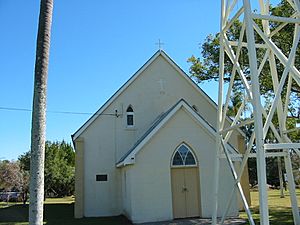 Bethania Lutheran Church, the year of construction 1872 is visible, 2005

The church was built in 1872 from locally sourced handmade bricks, timber and shingles. 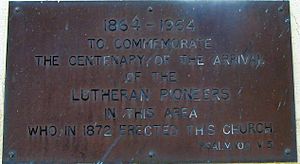 Plaque commemorating the establishment of the congregation in 1864

It replaced an earlier slab church built in 1864 when a group of German immigrants who immigrated on the ship Susannah Godeffroy first settled in the area and gave it the name Bethanien. The graveyard next to the church has graves dating from 1866. In 1875, the railway line was built, passing close to the church and over the site of the earlier building.

The shingle roof was replaced with iron in 1907 and the new pulpit was built in 1926. For the centenary celebrations in 1972 major renovations were undertaken. A new iron roof, a plywood ceiling, new lighting and leadlight windows were installed. The church, although still used, is no longer the major worship centre of the parish. 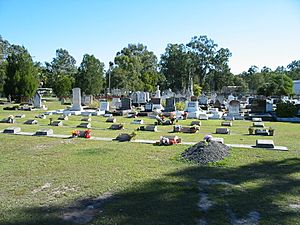 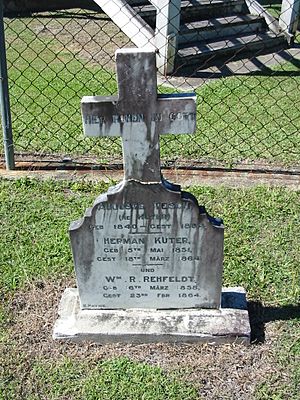 This single storey church is constructed of hand-made bricks, rendered internally and externally and has steep gable roofs sheeted with galvanised corrugated iron. The brick walls are strengthened with engaged brick piers visible externally. The exterior plaster is raked to suggest stone construction.

The original timber bell tower is positioned opposite the entry doors to the church. The Beenleigh railway line runs adjacent to the property and a timber footbridge allows pedestrian access across this line. Several graves established prior to the railway line still exist in front of the church and on the other side of the line. The cemetery is now located at the rear of the church.

The building consists of a rectangular double height nave with square projections at both ends. The gable roofs over the two projecting rooms are lower than the nave roof. At the eastern end is a 1972 concrete block entry vestibule that replaced a timber entry porch. It is rendered to match the rest of the building and has double entry doors located on its eastern face. The original entry doors have been removed. On the western end is a private room that contains the staircase leading to the pulpit.

The pulpit located at the western end of the main space has been built as a balcony above the altar. This arrangement is original but the fabric has been reconstructed.

At the eastern end of this space, over the original entry is a timber mezzanine which has been extended to twice its original size. The mezzanine is reached by a steep timber staircase. The raked ceiling has a plywood lining that replaced painted sheet metal. Two steel tie rods connect the roof structure above the wall level.

The church has suffered some alterations. Fabric has been replaced but the original forms have been maintained.

Bethania Lutheran Church was listed on the Queensland Heritage Register on 21 October 1992 having satisfied the following criteria.

All content from Kiddle encyclopedia articles (including the article images and facts) can be freely used under Attribution-ShareAlike license, unless stated otherwise. Cite this article:
Bethania Lutheran Church Facts for Kids. Kiddle Encyclopedia.