Cornubia is a suburb in the City of Logan, Queensland, Australia. In the 2016 census, Cornubia had a population of 7,317 people.

Cornubia is part of the Koala Coast and is home to hundreds of Australian native animals including koalas, wallabies, goannas and various species of birds (e.g. rainbow lorikeet). 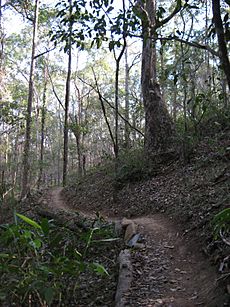 Walking and biking track in the Cornubia Forest Nature Refuge

A protected nature conservation area was created by the local government council from land purchased between 1999 and 2010. Located in the north-west of the suburb, the 196-hectare (480-acre) nature refuge consists of the former Cornubia Forest Park to the south and land known as the Cornubia Escarpment in the north. It is managed as part of Australia’s National Reserve System with objectives that include both conservation of flora and fauna, and recreation such as bushwalking and mountain bike riding. The refuge is also managed under a Koala Nature Refuge Agreement with the state government. The tall open forest ecosystem of blackbutt (Eucalyptus pilularis) and the brown thornbill (Acanthiza pusilla) in the area are described as endangered.

As of 2001[update], the population of Cornubia was around 3,300. 10 years prior there were only 2,000 people in the area. The suburb has a young population (median age of 35). About 6% of people are unemployed. After English (90%), the most spoken languages are Dutch and German.

Over 70% of employed people travel by car as most residents work in Brisbane City or at the Gold Coast. Efficient and cost-effective public transport is available in the area and is provided by the Logan City Bus Service, a privately owned company.

All content from Kiddle encyclopedia articles (including the article images and facts) can be freely used under Attribution-ShareAlike license, unless stated otherwise. Cite this article:
Cornubia, Queensland Facts for Kids. Kiddle Encyclopedia.