Carbrook is a suburb in the City of Logan, Queensland, Australia. Carbrook was previously called Gramzow, a name of German origin. The German name was anglicised in 1916 during the First World War. In the 2016 census, Carbrook recorded a population of 1,216 people. 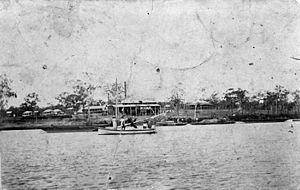 Carbrook was originally known as Gramzow after the village of Gramzow, Uckermark, Northern Germany, the name being given to it by the early German settlers who arrived in 1867. During World War 1, German names were unpopular and many German-sounding placenames were changed. In 1916, Gramzow's school and post office were renamed Carbrook.

Until 1949, Carbrook was within the Shire of Tingalpa.

Carbrook has a number of heritage-listed sites, including:

Carbrook hosts three functioning schools, two of which are private. There is one state school that is functioning and one that is monumental: Old Carbrook State School. A caravan park is adjacent to the cable ski park (See above). Fishing is favoured in various places by the Logan River. Wirunya hostel in situated in the vicinity.

All content from Kiddle encyclopedia articles (including the article images and facts) can be freely used under Attribution-ShareAlike license, unless stated otherwise. Cite this article:
Carbrook, Queensland Facts for Kids. Kiddle Encyclopedia.