Mount Cotton is a suburb located south-east of Brisbane, Queensland, Australia in the Redland City local government area. The area was settled by Germans in the late 1860s. In the 20th century, poultry farms were established and in recent years the number of residential sub-developments has expanded. 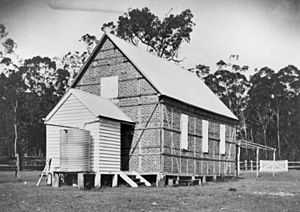 Mount Cotton is named for the mountain that is in the area. It was named by Robert Dixon, a surveyor in the colony of Queensland. He named it after the commandant of the penal settlement of Moreton Bay, Major Sydney Cotton. In 1933, the first chicken farm in the area was established. Until the Shire of Tingalpa was abolished in 1949, Mount Cotton hosted its council chambers.

Sirromet Wines winery on Mount Cotton Road opened in 2000. The vineyards are located on the Granite Belt where the climate is more suitable for grape growing.

Mount Cotton is a koala conservation area. In the west, the Venman Bushland National Park preserves a section of bushland along Tingalpa Creek.

To the east, a wildlife corridor goes from the mountain towards Eprapah scout environmental site and Victoria Point, along Eprapah Creek.

Several poultry farms are located in Mount Cotton. A Hillview Road chicken farm is developing a biomass power plant which is expected to provide renewable energy to the electrical grid. The project has faced opposition from local residents and delays as the plant was re-designed to encompass improvements in technology. Developers Cleveland Power claim the power plant will be able to supply electricity to 7500 homes annually.

All content from Kiddle encyclopedia articles (including the article images and facts) can be freely used under Attribution-ShareAlike license, unless stated otherwise. Cite this article:
Mount Cotton, Queensland Facts for Kids. Kiddle Encyclopedia.