Sheldon is a suburb of Redland City, Australia, 23 kilometres (14 mi) south-east of the Brisbane CBD.

The suburb is sparsely populated, consisting of mostly bushland, including some residential properties on acreage. The presence of multiple protected areas is notable, preserving the region's natural eucalyptus forests, and protecting endangered species such as the koala.

Tingalpa Creek flows through the western edge of the suburb, forming a border between the City of Brisbane.

The Sheldon name likely originated from the village of the same name in Devon, United Kingdom, which itself came from an Old English word meaning "steep-sided hill and wooden valley".

As a largely uninhabited rural area, the suburb of Sheldon only came into being in the year 1980. It combined the southern and northern portions of neighbouring suburbs Capalaba and Mount Cotton, respectively. 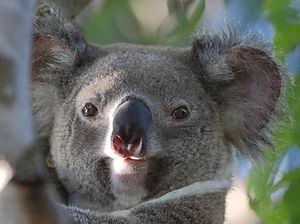 A koala living in the Redlands area, not far from Sheldon. 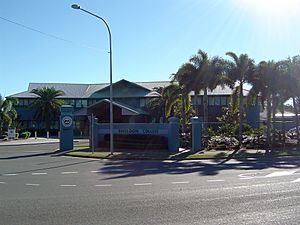 The main entrance of Sheldon College, often referred to as simply Sheldon, a private school well known in the Redlands despite being the only school in its suburb.

Sheldon College, one of the largest schools in Redland City, was founded in the suburb in 1997. Its campus is situated near the roundabout at which Sheldon, Capalaba, Alexandra Hills, and Thornlands meet at a quadripoint.

Karreman Quarries are also based in Sheldon, operating a quarry in the suburb, which provides material for road surfacing. Allegations of pollution, ties to the Liberal National Party, and familial OHS breaches have been made.

Since Tingalpa Creek's headwaters are located in the Sheldon region, the suburb is a catchment area for the entire Leslie Harrison Dam, which provides drinking water to much of the Redlands. The region is also home to a significant koala population. As a result, the suburb retains much of its natural bushland, extending north from the Venman Bushland National Park in Mount Cotton. Protected areas of Sheldon include:

All content from Kiddle encyclopedia articles (including the article images and facts) can be freely used under Attribution-ShareAlike license, unless stated otherwise. Cite this article:
Sheldon, Queensland Facts for Kids. Kiddle Encyclopedia.