Capalaba is an urban locality in the City of Redland, Queensland, Australia. In the 2016 census Capalaba had a population of 17,333 people. 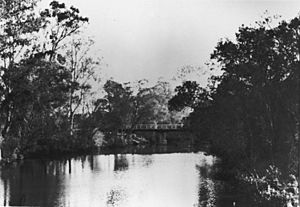 An early bridge across the Tingalpa Creek, connecting the City of Brisbane and Shire of Redland, circa 1936.

The name of Capalaba is believed to be derived from the Indigenous Yugarabul word for the ringtail possum, a marsupial native to the area.

European settlement began in the 1850s, led by farmers, lumberjacks, and sawmill operators. The region soon became important in the overland trade link between the settlements of Brisbane and Cleveland. Crossings and bridges over Tingalpa Creek were established to facilitate such transport.

The suburb grew into the 20th century, becoming a major source of freshwater for the then Redland Shire in the 1960s, due to the construction of the Leslie Harrison Dam. This prompted further population growth, and the introduction of commercial and industrial areas still present today.

Capalaba West was a related suburb located on the opposite side of Tingalpa Creek, rendering it part of Brisbane rather than the Redlands. It retained the Capalaba name until 2010, when it became incorporated into the Brisbane suburb of Chandler. 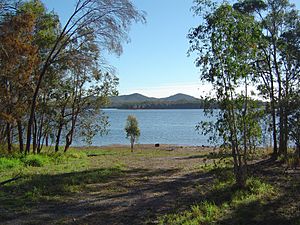 Tingalpa Reservoir, formed by Leslie Harrison Dam, viewed from a residential street of Capalaba. Mount Petrie can be seen in the background. 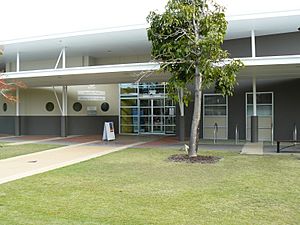 Major commercial and educational features of Capalaba include:

TransLink's Eastern Busway is planned to extend from UQ Lakes to Capalaba, but currently only reaches Langlands Park busway station in Coorparoo.

Capalaba is also the terminus for major roads crossing Tingalpa Creek from the City of Brisbane, including Old Cleveland Road and Mount Gravatt-Capalaba Road/Mount Cotton Road, both connecting directly to the Gateway Motorway.

All content from Kiddle encyclopedia articles (including the article images and facts) can be freely used under Attribution-ShareAlike license, unless stated otherwise. Cite this article:
Capalaba, Queensland Facts for Kids. Kiddle Encyclopedia.