Chandler is an outer south-eastern suburb in the City of Brisbane, Queensland, Australia. In the 2016 census Chandler had a population of 1,442 people.

It remained sparsely populated for decades, retaining much of its natural bushland. This lack of population motivated the construction of multiple buildings of the Sleeman Centre for the 1982 Commonwealth Games.

The Sleeman Centre housed the suburb's only significant structures until 2010, when the former suburb of Capalaba West became incorporated into Chandler. This extended Chandler's eastern border to Tingalpa Creek, separating Brisbane from Redland City, and added a small commercial area along Old Cleveland Road to the suburb, including the erroneously named Capalaba Produce Village. 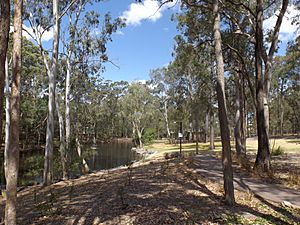 An area of bushland in Chandler, consisting of eucalyptus trees and a small lake, close to the Sleeman Centre.

All content from Kiddle encyclopedia articles (including the article images and facts) can be freely used under Attribution-ShareAlike license, unless stated otherwise. Cite this article:
Chandler, Queensland Facts for Kids. Kiddle Encyclopedia.