Birkdale is a coastal locality in the City of Redland, Queensland, Australia. In the 2016 census, Birkdale had a population of 14,497 people.

The median age of the Birkdale population was 39 years, 2 years above the national median of 37.

Birkdale was named in 1880 by local landowner William Thorne after his birthplace, Birkdale in England.

In the 1920s, poultry was a major industry in Birkdale.

Major features of Birkdale are a railway station, a canal style housing development known as Aquatic Paradise, a significant shopping precinct located near Aquatic Paradise and a retirement village known as Wellington Manor. 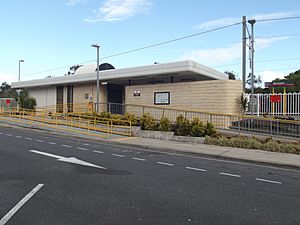 All content from Kiddle encyclopedia articles (including the article images and facts) can be freely used under Attribution-ShareAlike license, unless stated otherwise. Cite this article:
Birkdale, Queensland Facts for Kids. Kiddle Encyclopedia.