Wellington Point is a residential locality in the City of Redland, Queensland, Australia. In the 2016 census, Wellington Point had a population of 12,350 people. The suburb is a popular seaside destination within the Brisbane metropolitan area and is notable for a popular walk along a sandbar to King Island which emerges at low tide.

The median age of the Wellington Point population was 39 years, 2 years above the national median of 37.

The people of the Quandamooka lived in the Redlands long before white settlement. Food was plentiful and skillfully hunted, fished and collected. Tribes of the Yuggera language group inhabited the whole area, with the tribe inhabiting the mainland coastal strip stretching from Redland Bay to the mouth of the Brisbane River being called the Koobenpul.

It is considered that the first Europeans to travel through Wellington Point were three shipwrecked timber getters, Pamphlett, Finnegan and Parsons in 1823.

Wellington Point was named by surveyors Robert Dixon and James Warner in 1842 after the Duke of Wellington who led the army of the United Kingdom in the Battle of Waterloo in 1815. The bay formed in part by Wellington Point was named Waterloo Bay. The first European settlers arrived in Wellington Point in the mid-1860s after the first land sales of 1864 at which one of the big purchasers was Thomas Lodge Murray Prior. Another purchaser was Captain Louis Hope, who built Ormiston House and established a major sugar plantation and milling operation in Ormiston.

In 1887 Gilbert Burnett subdivided more of his Wellington Point holdings, especially around the railway station. Edith, Alice and Matilda Streets were laid out and named after three of Burnett’s daughters and the Wellington Point State School opened. 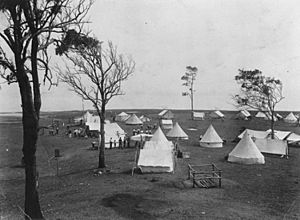 Tents on the foreshore at Wellington Point, around 1911

The first Methodist church was established in 1888, as was the original Wellington Point Hotel which was demolished in 1972 but has since been rebuilt. Fernbourne was constructed in 1889, but was renamed Whepstead Manor in 1900.

By 1893 the population of the area was 260 most involved in primary industries and service industries and by 1897 the end of Wellington Point was set aside as a recreation reserve.

The Point’s popularity continued to grow with special fruit trains run to the area in 1906 to sample the strawberries and to visit the gardens and vineyards and by 1911 retirees and commuters began to move into the area and more housing blocks were set aside. 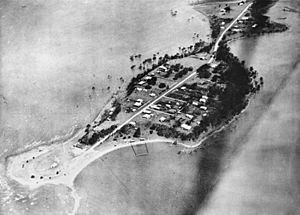 Whilst the great depression in the late 20s and 30s was a personal tragedy for many, it was also a time of work creation and the development of infrastructure. An interesting development at the point was the drilling for oil which began in 1931. The drilling was commercially unsuccessful, but it did attract the interest of the Prime Minister and the Catholic Church. 1931 was also the year that town electricity was first provided in the area and the Wellington Point jetty was completed in 1937.

The Second World War had a significant effect on Wellington Point and arguably the most obvious consequence was the US camp during 1943 and 1944 when 1500 US forces camped there and conducted shooting and bombing practice.

After the war the pace of life slowed but change was coming. In 1959 a chemist, doctor’s surgery, butcher, garage and fish shop were set up and with the arrival of reticulated water in 1969, farmland began to be sub-divided for house blocks.

In 1983 the iconic Redland Cricketers Club was opened.

Wellington Point has a number of heritage-listed sites, including: 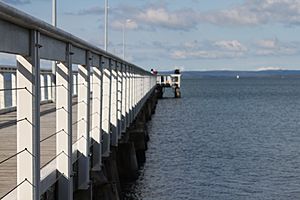 A view of the jetty located on Wellington Point

Significant features include the point, King Island (which is joined to the point at low tide by a natural sand causeway), Redlands Sporting Club, Sovereign Waters (a lakeside housing development), Fernbourne House and Whepstead Manor (both significant historical residences) and a shopping and restaurant precinct which contains the Wellington Point Clock Tower.

A railway service to Brisbane and other suburbs on the line between Brisbane and Cleveland, Queensland is accessed at the Wellington Point railway station, Brisbane.

All content from Kiddle encyclopedia articles (including the article images and facts) can be freely used under Attribution-ShareAlike license, unless stated otherwise. Cite this article:
Wellington Point, Queensland Facts for Kids. Kiddle Encyclopedia.