Alexandra Hills is a locality in Redland City, Queensland, Australia. Alexandra Hills sits between two major areas of Redlands, with Cleveland to the east and Capalaba to the west.

Alexandra Hills itself is notable as the only enclaved suburb of the largely coastal Redland City, within which many community organisations are based;

Graeme Duckham, international and local award-winning television producer. Among his many credits is the multi Logie winning television series Better Homes and Gardens. Graeme was the originating producer of BH&G., a world first in Masthead television. 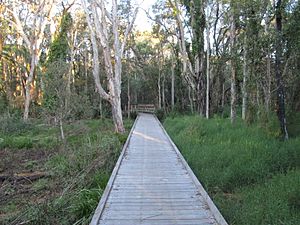 Windemere Road Park is the most developed park in Alexandra Hills. The most recent addition has been a climbing wall. It also hosts a flying fox, skate/bike bowl, basketball court and an off the leash area for dogs. The park itself stretches from Windemere Road to Cumberland Drive.

The George Street and Hanover Drive Parks also have dog offleash areas and there is a trial area in Valantine Park.

All content from Kiddle encyclopedia articles (including the article images and facts) can be freely used under Attribution-ShareAlike license, unless stated otherwise. Cite this article:
Alexandra Hills, Queensland Facts for Kids. Kiddle Encyclopedia.