Burbank is a greenbelt suburb in the City of Brisbane, Queensland, Australia. In the 2016 census Burbank had a population of 1,050 people.

The area was originally known as Upper Tingalpa. It has been claimed the suburb was named after Alfred Harry Burbank, a surveyor and farmer, who was a resident in the area from 1890 to 1908, or that it was named after Frank Burbank, a local horse dealer.

The main road across in the area is the Mount Gravatt-Capalaba Road. There are also a couple of working and hobby farms. There are a few palm nurseries and at least two turf farms in the area. Burbank has a number of churches and temples and there is a Jewish school. The closest public primary school is Mount Petrie State School in Mackenzie. There are no shops in the suburb and public transport is very limited.

The almost entirely residential outer suburb is dominated by large acreage blocks, many with extensive gardens and prestige housing built on them. A dam built in the late 1960s has shaped the modern development of this area. Called the Leslie Harrison Dam, it forms the Tingalpa Reservoir on Tingalpa Creek. The dam once provided water for residents of Redland City but has been connected to the regional water supply network. Because of water quality concerns the population density has been kept low within the immediate catchment area. 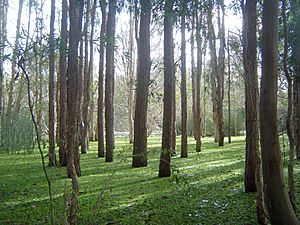 Burbank has not been subdivided into small residential blocks of land to ensure the population remains low. In figures published in early 2009 from the Australian Property Investor magazine, Burbank had the third highest median house price in Australia, at A$1.1 million. Recent census data shows that Burbank has the most three-car households in Brisbane, at a rate of 40%.

According to RP Data figures, residents of Burbank remain living in the suburb for an average of 13 years, which is the fourth longest in Brisbane, behind nearby Sheldon and both Point Lookout and Amity Point on North Stradbroke Island.

Since its inception, the Brisbane City Council land acquisition program for natural reserve has purchased undeveloped properties in Burbank. A koala habitation protection called Brisbane Koala Park was also created, with visitor vacilities and boardwalks located on Ford Road. A second park, called JC Trotter Memorial Park, is located on Cherbon Street, adjacent to the Tingalpa Reservoir. It is estimated that 3,000 to 5,000 koalas live in the southeast of Brisbane and this park is designed to protect their habitats and their movement corridors.

In 2008, a private property at Burbank became the first property to be classified as conservation area under an environmental covenant with the Brisbane City Council. The agreement is part of the BCC's GreenHeart CitySmart plan which aims to restore 40% of the city's land to natural habitat by 2026.

All content from Kiddle encyclopedia articles (including the article images and facts) can be freely used under Attribution-ShareAlike license, unless stated otherwise. Cite this article:
Burbank, Queensland Facts for Kids. Kiddle Encyclopedia.