Mansfield is a suburb in the City of Brisbane, Queensland, Australia. In the 2016 census, Mansfield had a population of 8,695 people.

Mansfield is located in the region of the city which is now colloquially known as the "Bible Belt" due to the large number of people who have settled there to be close to Christian schools and churches.

The suburb recorded a population of approximately 8,700 at the 2016 census. The suburb has a moderate Greek presence with under 2.3% of the population speaking Greek as a first language.

The suburb has an agricultural past, consisting mainly of dairy cattle and sheep grazing. Original fencelines can still be found in remaining pockets of bushland. There was also light development of industries related to agriculture, such as wool processing and scouring. Also the quarry once located on Ham and Wecker Roads, excavated large amounts of sandstone used throughout some of the historic landmarks of Brisbane, such as the Brisbane City Hall.

Recently reopened, the "Rock Arena" at the Mansfield Tavern was in its heyday a popular venue for touring musical acts and has starred such acts as The Offspring, Hunters & Collectors, Madness, Statoz Quo, Hoodoo Gurus, The Angels and great British rock band The Cult.

Mansfield has regular bus services to the CBD and to the Westfield Garden City shopping centre at Upper Mount Gravatt.

Arguably the greatest asset of the Mansfield area is its remaining pockets of bushland and parklands. The largest public park in Mansfield, Broadwater Park, is a reasonably large open space with barbecue areas and children's play equipment. Adjoining this parkland is a large bushland reserve which follows the course of Bulimba Creek (a tributary of the Brisbane River). 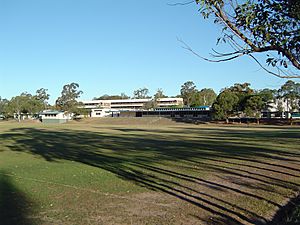 Mansfield State School is a government primary (Prep-6) school for boys and girls. In 2017, the school had an enrolment of 1032 students with 73 teachers (60 full-time equivalent) and 32 non-teaching staff (21 full-time equivalent). It includes a special education program.

Mansfield State High School is a government secondary (7-12) school for boys and girls. In 2017, the school had an enrolment of 2448 students with 172 teachers (161 full-time equivalent) and 59 non-teaching staff (43 full-time equivalent). It includes a special education program.

All content from Kiddle encyclopedia articles (including the article images and facts) can be freely used under Attribution-ShareAlike license, unless stated otherwise. Cite this article:
Mansfield, Queensland Facts for Kids. Kiddle Encyclopedia.