Tingalpa is a suburb in the City of Brisbane, Queensland, Australia. In the 2016 census, Tingalpa had a population of 8,290 people.

The origin of Tingalpa's name is uncertain. It may be named after Tingalpa Creek, which lies 5 kilometres (3.1 mi) east, or be derived from the Turrubal words tangul (meaning 'plant for stupefying fish') and pa (meaning 'place').

Tingalpa Creek was surveyed in 1841 and named Tingulpa, probably derived from an Aboriginal expression referring to a fat kangaroo. 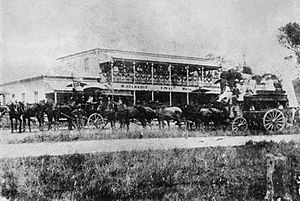 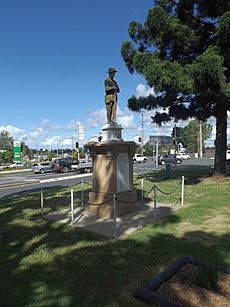 In 1863, a township site was surveyed on the west side of Tingalpa Creek, where Old Cleveland Road crossed the creek. It was never built on and was known as Old Tingalpa. In 1943, this location was formally abolished. In 1860s a new site was settled called New Tingalpa, away to the north-west. In 1867, a post office was opened. In the same year a local architect, Richard Suter designed the Gothic Anglican Christ Church, which was built in 1868. The church and burial ground located on Wynnum Road, east of Bulimba Creek. Both the church and its burial ground are listed on the Queensland Heritage Register. The Royal Mail Hotel was licensed in 1870. This hotel is now named the Tingalpa Hotel. The Tingalpa primary school was opened in 1873. In 1880, a local government division was established for the Tingalpa area. The boundaries of this area were "south-east from the intersection of the Pacific Highway and the Mount Gravatt-Capalaba Road, crossing the Tingalpa Creek and ending at Redland Bay." The headquarters of the local government were located at Mount Cotton.

The Wynnum and Manly Road are where the above facilities are roughly located. In 1919, the diggers's war memorial was erected, making this location more prominent. In 1925, the west part of the Shire of Tingalpa become part of the Greater City of Brisbane. In 1949 the rest of the shire was joined with the Shire of Cleveland, becoming Shire of Redland (now City of Redland). In the 1949 Queensland Post Office Directory there were eight poultry farms and there are fewer dairymen. There was also two motor garages and the Pacific Cafe on Wynnum Road. In 1998, Christ Church, Tingalpa and its burial ground were listed on the Queensland Heritage Register.

Tingalpa features a large amount of parks and bushland. Well known Meadowlands Park and Minnippi Park are located less than four minutes drive from Tingalpa. Bulimba Creek passes through these parks on its way to the Brisbane River. Moreton Bay Sports Club is also located at Carmichael Park next to the creek. The venue hosts cricket and Brisbane Premier League matches with 2001 and 2010 grand final winners, and 2011 League Champions Wolves FC. Kianawah Park is the oldest park in the suburb and has extensive facilities.

Tingalpa has bike paths going though their parks and these are part of the extensive bike paths that are throughout Brisbane.

In 2011, one of the first Masters Home Improvement retail outlets in Queensland opened in Tingalpa and was located at the intersection of Wynnym Road and New Cleveland Road up until its closure in December 2016.

All content from Kiddle encyclopedia articles (including the article images and facts) can be freely used under Attribution-ShareAlike license, unless stated otherwise. Cite this article:
Tingalpa, Queensland Facts for Kids. Kiddle Encyclopedia.