Manly is an eastern bayside suburb in the City of Brisbane, Queensland, Australia. In the 2016 census, Manly had a population of 4,064 people.

Manly is located approximately 19 km (12 mi) east of the Brisbane central business district. Surrounding suburbs are Wynnum (to the north), Lota to the South and Manly West (to the west). To the east lies Moreton Bay. 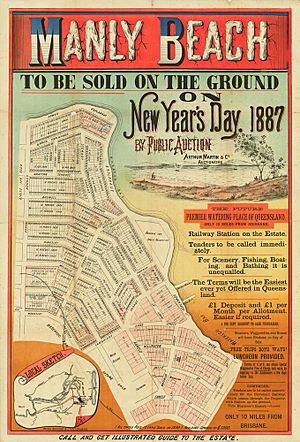 This part of Moreton Bay was occupied by the Aboriginal Mipirimm people. Their lifestyle was semi-nomadic. Increasing contact with the white settlers brought new diseases to the Aborigines including smallpox and tuberculosis which ravaged the indigenous population.

European settlement of the Manly area first took place around 1860. In 1882 land was sold by auction for the Manly Beach Estate, apparently named after Manly, New South Wales beach in Sydney. In 1889 a railway line was opened that provided a direct service to the state capital, Brisbane. By the early 1900s the area had become a popular seaside location.

The well-sheltered coastal location of Manly has resulted in it becoming a popular location for boating. In 1958 Manly Boat Harbour was built. Large tidal walls were constructed to the north and south with dredging being undertaken to deepen the harbour. The silt that was recovered in this process was brought ashore and used in the construction of the parks and parking areas around the harbour.

Manly has a number of heritage-listed sites, including:

Manly Boat Harbour is now the largest boat harbour facility in the Southern Hemisphere, with over 3,000 dry standings and wet berths, plus two public boat ramps (one at each end of the harbour).

A number of boating clubs are based in Manly including the Royal Queensland Yacht Squadron, the Wynnum Manly Yacht Club, the Moreton Bay Trailer Boat Club, and the Darling Point Sailing Squadron (which shares space with the Multi-Hull Club of Australia, and the charity for handicapped people known as Sailability).

Brisbane Coast Guard (a Flotilla of the Australian Volunteer Coast Guard Association) also has its Flotilla Base in Manly Boat Harbour, at 40 Trafalgar Street, near the harbour entrance. This Flotilla, the largest in Australia, has the Lord Mayor of Brisbane as its Patron. It was formed in 1972 and continues to operate duty rosters every weekend and public holiday, with its emergency services on call 24/7.

Brisbane Coast Guard operates weekends and public holidays. On weekdays, Marine Radio Manly VKQ447 takes over the marine radio watch from 6am through until 9pm. They can be contacted on VHF Channels 73,67 Repeater channels 21 outside the islands, Ch81 in the Northern bay and Ch 82 in the Southern Bay, 27mhz Chs 88 and 90 and HF ch 6215. They also run SROCP and LROCP marine radio licence courses and free Know Your Marine Radio Courses. Future courses will include weather courses, navigation in the shipping lane courses and HF radio courses.

Over 43% of households in this area consist of couples without children and a further 37% are couples with children.

Stand-alone houses account for 67% of all dwellings in this area, with townhouses accounting for a further 10%. The median house price in Manly for the 2004 calendar year was $510,000.

Federally, the people of Manly are represented by Ross Vasta MP (elected 2010) in the seat of Bonner.

The median age of the Manly population was 42 years of age, 5 years above the Australian median.

A number of local bus services operate between Manly and surrounding suburbs, with connections to Brisbane City services in Wynnum.

All content from Kiddle encyclopedia articles (including the article images and facts) can be freely used under Attribution-ShareAlike license, unless stated otherwise. Cite this article:
Manly, Queensland Facts for Kids. Kiddle Encyclopedia.