Wynnum is a suburb located on the shores of Moreton Bay in Brisbane, Australia, about 16 kilometres (9.9 mi) east of the CBD. Although Wynnum is situated next to the ocean, the shoreline is covered in mangroves and aromatic mudflats which makes it unsuitable for swimming at low tide. Next to the Wynnum Wading Pool which has a playground and Water Park and the Wynnum Jetty, there is a man-made beach called Pandanus Beach.

The area was sparsely settled until the arrival of the railway in the late 1880s, but then grew fairly rapidly. The former Wynnum Shire Council was created in 1902, and twelve years later Wynnum became a municipality with its own town council and the right to elect a mayor. The Wynnum Town Council was absorbed into the enlarged City of Brisbane in 1925.

The Wynnum Seventh-day Adventist Church was established in late 1937 with the first minister being Pastor Septimus Wilfred Carr. Initially they met in private homes and then relocated the Wynnum RSL Hall and then at the Wynnum St Peters Church of England Hall. In 1947 a block of land was purchased at the corner of Sunflower and Carnation Street, Wynnum and in 1948 the Mitchelton Methodist Hall was purchased and moved to the site as the congregations' first church.

The suburb has traditionally boasted a country town atmosphere, but new residential development is resulting in significant population growth and changing demographics. The area is now marked by a mix of character housing and modern housing.

The median age of the Wynnum population was 40 years, 3 years above the Australian median. 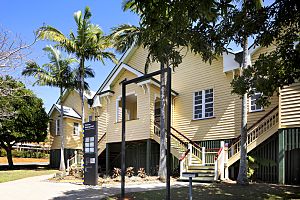 Wynnum has a number of heritage-listed sites, including:

All content from Kiddle encyclopedia articles (including the article images and facts) can be freely used under Attribution-ShareAlike license, unless stated otherwise. Cite this article:
Wynnum, Queensland Facts for Kids. Kiddle Encyclopedia.