Port of Brisbane facts for kids 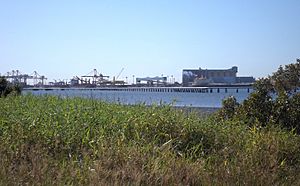 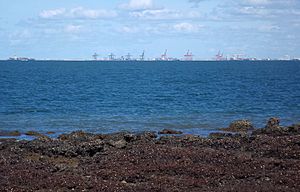 The port is managed by the Port of Brisbane Pty Ltd (PBPL) under a 99-year lease from the Queensland Government. The Port of Brisbane has 29 operating berths including nine deep-water container berths and three deep-water bulk berths as well as 17 bulk and general cargo berths. In total the port facilitates more than 2,600 ships each year and transports more than 28 million tonnes of cargo each year.

There are two cruise ship wharves for Brisbane, with differing facilities. Portside Wharf was completed in 2006 and is an international standard facility for cruise liners, offering restaurants, coffee shops, gift shops, and more. However, due to the height restrictions of the Gateway Bridge, the larger oceangoing cruise liners must dock further down the river at the more industrial standard Multi User Terminal at the Port of Brisbane. Multi User Terminal is managed by the Port of Brisbane.

The port accommodates a visitors centre and in 2005 a shorebird roost was constructed. The bird roost is the largest site built specifically for migratory shorebirds on the east coast of Australia.

Deposits of silt and sediment in the ports channels and berths have caused delays of up to five days in the delivery of cargo including oil supplies. This has occurred in 2011, 2013 and 2014. Millions of dollars is spent on dredging annually.

The Port of Brisbane is currently under a large upgrade and extension spending A$50 million on infrastructure and a further A$100 million on equipment including over 25 automated straddle carriers owned by Patrick Corporation.

All content from Kiddle encyclopedia articles (including the article images and facts) can be freely used under Attribution-ShareAlike license, unless stated otherwise. Cite this article:
Port of Brisbane Facts for Kids. Kiddle Encyclopedia.