Port of Gladstone facts for kids 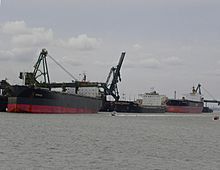 The Port of Gladstone is a seaport in Gladstone, Queensland. It exports the fourth largest amount of coal of any seaport in the world.

The port has several different parts to it. Auckland Point was where coal began to be exported in 1925. Later, live horses were moved there in the mid 1930s. Barney Point was used to export coal from Moura. Barney Point was made part of the Port of Gladstone in November 1998.

The Fisherman’s Landing part was opened in 1980. It was expanded in the 1990s and is planned to be expanded more. Boyne Wharf is used by the Boyne Island aluminium smelter and was opened in August 1982. The South Trees part of the port have been used by Queensland Alumina Limited, an aluminum company. The RG Tanna Coal Terminal was opened in 1997 and is used to export coking coal to Japanese steel mills.

All content from Kiddle encyclopedia articles (including the article images and facts) can be freely used under Attribution-ShareAlike license, unless stated otherwise. Cite this article:
Port of Gladstone Facts for Kids. Kiddle Encyclopedia.