The Australian Maritime Safety Authority is responsible for maritime safety and seaworthiness of Australian and foreign vessels in Australian waters including compulsory pilotage, aids to navigation, the Australian Rescue Coordination Centre and coordination of search and rescue operations, and management of Australia's international maritime obligations.

The Office of Transport Security has various responsibilities for maritime security.

Each State Government also has agencies with coast guard responsibilities.

Maritime Safety Queensland is responsible for maritime safety and the Queensland Police Service has a water police unit for law enforcement along the coastline, in waterways, and for Queensland islands.

Neither the Royal Volunteer Coastal Patrol nor the Australian Volunteer Coastguard are active in Western Australia, which is the largest state with the longest coastline. Inshore close to towns the West Australian Police co-ordinate local search and rescue between various state agencies (such as DOT, Fisheries and Water Police), Volunteer Sea Rescue Groups (VSRGs) who provide the majority of the assets and not for profit companies such as Westpac helicopter. Volunteer Marine Rescue Groups (VMRs) form the core of the system with three main areas of emergency response / search And rescue (SAR), education, and radio monitoring. VMRs (37) are affiliated to DFES (Department of Fire and Emergency Services) or two maintain independence from government and act as charities (in much the same way as the RNLI in UK work). The 3 largest VMRs are part of DFES including Mandurah the oldest VMR group in WA. 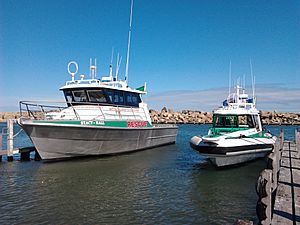 Marine Rescue NSW is a charitable organisation similar to the RNLI in Britain. It provides radio and rescue services over New South Wales with 44 units along the coast including two inland units and has over 3000 volunteers. It is also a registered training organisation ensuring that its members are trained and maintain competencies.

The NSW Government imposes an annual levy of $7 both on boat registration and on boat driver licences to provide funds for MRNSW to refurbish and replace old boats and equipment. As at 1 January 2016, MRNSW has refurbished a number of boats and purchased many new purpose built boats. MRNSW members are volunteer and in addition to their duties as radio operators, boat crew and many other tasks spend large amounts of time raising funds needed in addition to those provided by the government. 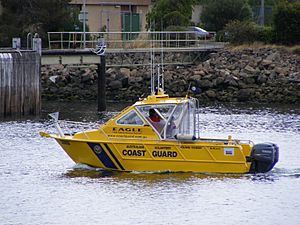 The Australian Volunteer Coast Guard Association was established in 1961, and modelled on the US Coast Guard Auxiliary, the association is an organisation composed entirely of volunteers. It guards the coast in the most effective way - initially by education, example, examination and finally by search and rescue. The Australian Volunteer Coast Guard has no law enforcement powers. Flotillas and radio bases are located from the Skardon River in the Gulf of Carpentaria, down the eastern seaboard to Ceduna in South Australia, including Tasmania and major inland lakes and weirs. Coast Guard currently has more than 2,500 Regular members and 9,000 Associate members. Expansion is continuing in areas of need.

In 1936 Commander Rupert Long, OBE, RAN, Director of Naval Intelligence raised with retired Captain Maurice Blackwood, DSO, RN the possibility of raising a group of trained yachtsmen as a Naval Auxiliary Service. Discussions were held with HWG Nobbs and W Giles, both Sydney yachtsmen and a proposal sent to the Australian Commonwealth Naval Board that a Volunteer Coastal Patrol be established under the command of Captain Blackwood. The Naval Board supported this and on 27 March 1937 the Volunteer Coastal Patrol was established under the command of Captain Blackwood, DSO, RN (rtd) with H.W.G. Nobbs as Staff Officer Operations and W Giles as Staff Officer Administration.

During World War II Coastal Patrol members became special constables and guarded commercial wharves, oil installations and bridges. By the war's end, patrol vessels had patrolled 128,000 miles of harbour and coastal waters and donated 393,000-man-hours of unpaid war service. They were granted the right to fly the Police Nemesis pennant as recognition of this service and the right to fly the New South Wales State Flag as their ensign.

Post war development saw the Patrol undertake civilian search and rescue operations as their primary role but maintain their original Royal Australian Navy inspired organisation structure, ranks and uniform. 1955 saw a democratically elected council formed which directed the development and administration of the Patrol and appointed the Officer Commanding. 1963 saw the Patrol become an incorporated company and the articles of association written. In 1974, Her Majesty the Queen granted the Patrol the privilege of adding the Royal prefix to its title when it became the Royal Volunteer Coastal Patrol (RVCP). In 2008 the NSW State Government after strong representations by RVCP agreed to the amalgamation of the three volunteer rescue organisations (RVCP, Volunteer Rescue Association (marine sections) and Australian Volunteer Coast Guard (NSW units) into one organisation which became Volunteer Marine Rescue NSW (VMRNSW) and commenced operation on 1 January 2010. Today VMRNSW works closely with all government agencies in search and rescue and education to the boating public. They maintain constant watch in Radio Bases for marine traffic, work with the Water Police in search and rescue as well as crowd control at major maritime events, run education classes in seamanship, navigation, first aid and meteorology for the public as well as providing constant information to Radio Stations and TV stations regarding sea conditions etc.

The NSW Government imposes an annual levy of $7 on boat registration and boat driver licences to fund the operation of VMRNSW which has enabled the replacement and refurbishment of many old boats and equipment. All members of the Patrol are volunteers with a large proportion of their time devoted to raising funds needed in addition to the government provision.

Proposals for an Australian Coast Guard

All content from Kiddle encyclopedia articles (including the article images and facts) can be freely used under Attribution-ShareAlike license, unless stated otherwise. Cite this article:
Coast guards in Australia Facts for Kids. Kiddle Encyclopedia.