Manly War Memorial is a heritage-listed memorial at 184 Carlton Terrace, Manly, City of Brisbane, Queensland, Australia. It was built from 1920 to 1921. It is also known as Ferguson Street Reserve, Manly Dam, and Soldiers Memorial Park. It was added to the Queensland Heritage Register on 21 August 1992. 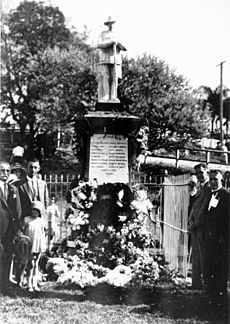 The Manly War Memorial was unveiled by Walter Henry Barnes, Member of the Queensland Legislative Assembly, on 5 March 1921. It is not known who designed the memorial, or who the mason was. The memorial, originally of Helidon brown freestone on a base of Enoggera granite, with a statue of Carrara marble, honours the 16 local men who fell during the First World War.

The land on which the park is located was originally part of a 150-acre (61 ha) lot bought by Thomas Jones in 1860. In 1882 the land was sold to the Arnold brothers who sub divided the land for auction. From the late 1890s the area was designated as a water reserve and eventually formed part of the Manly Dam, filled in some time after 1908. The land was never developed and was subsequently divided by a road. The memorial was erected around 1920, however the land, which had always been considered a park, was not officially resumed until 1937.

Previously known as Manly Memorial Park, it was renamed in 1990 after Richard Russell, pioneer Manly citizen and businessman who was elected mayor in 1919.

The Manly digger statue was plagued by acts of vandalism over the years, which culminated in 1992 in the statue being pulled from the pedestal and the head broken off. The statue was replaced with a concrete replica in 2007, but the original Italian marble statue, thought lost, was rediscovered in a Brisbane City Council depot in Lota in 2013.

Significance of war memorials in Australia

Australian war memorials are also valuable evidence of imperial and national loyalties, at the time, not seen as conflicting; the skills of local stonemasons, metalworkers and architects; and of popular taste. In Queensland, the digger statue was the popular choice of memorial, whereas the obelisk predominated in the southern states, possibly a reflection of Queensland's larger working-class population and a lesser involvement of architects.

Although there are many different types of memorials in Queensland, the digger statue is the most common. It was the most popular choice of communities responsible for erecting the memorials, embodying the ANZAC spirit and representing the qualities of the ideal Australian: loyalty, courage, youth, innocence and masculinity. The digger was a phenomenon peculiar to Queensland, perhaps due to the fact that other states had followed Britain's lead and established Advisory Boards made up of architects and artists, prior to the erection of war memorials. The digger statue was not highly regarded by artists and architects who were involved in the design of relatively few Queensland memorials.

Most statues were constructed by local masonry firms, although some were by artists or imported. They varied slightly in design, presumably to suit the needs of the communities who commissioned them. 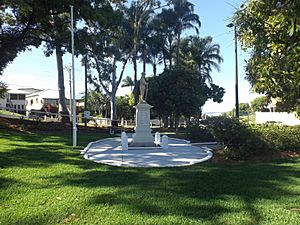 The First World War Memorial is situated in a small park at the end of the main shopping street of Manly. It sits in a constructed oval-shaped amphitheatre within the park which comprises a formal arrangement of paths, garden seats, hedges and mature trees.

The memorial is surrounded by kerbing with bollards at each corner which are square in plan with pyramidal apexes. It sits on a circular concrete pad with kerbing to the outside edge.

The pedestal sits on a rock faced granite base with a chamfered top. It is of simple design and constructed of sandstone which has been painted.

The pedestal dado is capped by a simple concave cornice.

Manly War Memorial was listed on the Queensland Heritage Register on 21 August 1992 having satisfied the following criteria.

Erected in 1921, the memorial at Manly demonstrates the principal characteristics of a commemorative structure erected as an enduring record of a major historical event. This is achieved through the use of appropriate materials and design elements.

The memorial and its intact setting are a landmark within Manly and contribute to the aesthetic qualities of the townscape.

All content from Kiddle encyclopedia articles (including the article images and facts) can be freely used under Attribution-ShareAlike license, unless stated otherwise. Cite this article:
Manly War Memorial Facts for Kids. Kiddle Encyclopedia.