Mount Gravatt Lookout is accessible via Shire Road which winds its way past water towers up to the lookout carpark and a communications tower. Furthermore, there is a large cave complex located at on a walking trail on the southern slope of the mountain (Latitude: 27.544184º S Longitude:153.076841º). 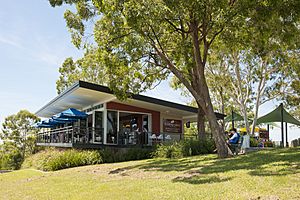 The suburb is populated by middle class, young families seeking stability. Mount Gravatt was once a popular destination of German, Irish and English Immigrants to Australia after World War 1 and 2. The suburb has a growing number of Southern European Australians (mostly from Greece and Italy).

Since the closure of the tram network in 1969, the public transport has been provided by buses operated by Brisbane Transport and a local bus company the Mount Gravatt Bus Service. The South East Busway is connected by a service from Mount Gravatt Central to the Busway terminal at Griffith University.

All content from Kiddle encyclopedia articles (including the article images and facts) can be freely used under Attribution-ShareAlike license, unless stated otherwise. Cite this article:
Mount Gravatt, Queensland Facts for Kids. Kiddle Encyclopedia.