Fairfield is a suburb of the City of Brisbane, Queensland, Australia. In the 2016 census, Fairfield had a population of 2,980 people.

Fairfield is bounded to the north by the South Brisbane Cemetery, to the east by the railway line to Beenleigh, to the south by Venner Road and to the west by the Brisbane River.

Fairfield along with much of Brisbane was hit by floods in January 2011. And it also flooded in the 1974. 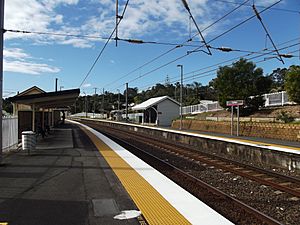 There is a Fairfield train station on the line to Beenleigh. The main bus service is the 196, which runs every 15 minutes during the day and commences at Fairfield Gardens. During the morning peak the 107 and 108 bus services are also available. There is also a taxi rank.

Fairfield has a Skate Park that caters for young people in the suburb.

Fairfield has its own shopping centre, Fairfield Gardens. The main shop in the centre is a Coles supermarket. It also has a Terry White Chemist, Australia Post, BWS, Dollars and Cents, a Doctors surgery and a library.

The suburb borders the Brisbane River and has many parks.

All content from Kiddle encyclopedia articles (including the article images and facts) can be freely used under Attribution-ShareAlike license, unless stated otherwise. Cite this article:
Fairfield, Queensland Facts for Kids. Kiddle Encyclopedia.