Kangaroo Point is an inner southern suburb in the City of Brisbane, Queensland, Australia. In the 2016 census, Kangaroo Point had a population of 8,063 people.

The suburb features two prominent attractions, the Story Bridge and Kangaroo Point Cliffs. At the eastern margins the Captain Cook Bridge marks the start of the Pacific Motorway.

Kangaroo Point is located on a peninsula formed of harder rhyolite rock which the Brisbane River flows around. On the northern tip of the peninsula the Story Bridge connects it to the central business district and the suburb of Fortitude Valley. The suburb of Woolloongabba is located to the south. The six-lane Main Street runs from Story Bridge to Woolloongabba. The landscape of Kangaroo Point is predominantly high rise apartments towards the tip of the peninsula while the southern end is predominantly low-medium density apartments and Queenslander type houses. 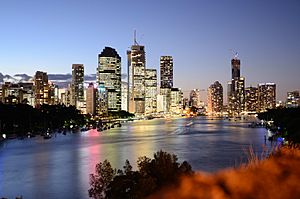 The cliffs are a popular picnic, rock climbing and abseiling site. The steepness of the cliffs was increased by quarrying operations which mined the volcanic rock or rhyolite lava flows which form the cliffs. The lava was deposited in the Triassic Period about 230 million years ago and filled up an ancient river valley. They currently form the banks of the Brisbane River.

The Story Bridge is a prominent landmark. It is able to be climbed with authorised tourist groups and provides the main means of access to the north of Brisbane. Directly under the bridge is the Story Bridge Hotel, and Yungaba, one of Brisbane's most unusual and iconic landmarks.

The Kangaroo Point Natural History Project was implemented by the council in 2013 to recognise the contribution by some of Queensland's pioneering scientists and researchers from the area. Along a heritage trail through the CT White and James Warner parks are a series of signs and sculptures to commemorate their lives and work: Cyril Tenison White (government botanist), Frederick Manson Bailey (colonial botanist), Silvester Diggles (naturalist), Oscar Werner Tiegs (entomologist and zoologist), James Warner (surveyor), and Harry Oakman (landscape artist). 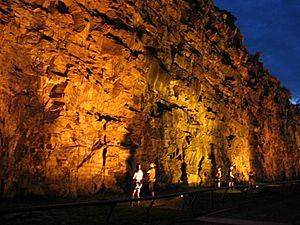 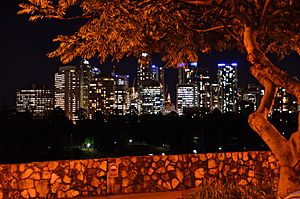 Walkway along the cliffs

By bus the suburb is serviced by the South East Busway transit line and buses along Main Street and Shafstons Avenue. By road Kangaroo Point residents rely on the Story Bridge and Captain Cook Bridge for access to the north, and the Southeast Freeway for access to the south. Main Street connects the Story Bridge through the suburb to the South East Freeway. Bicycle paths run along the Brisbane River from South Bank to and over the Story Bridge. The bicycle paths are heavily used by cyclists, roller skaters and pedestrians.

Cross River and CityHopper ferry services operate from the Riverside wharf in the CBD to Holman Street ferry wharf near the peak of Kangaroo Point. CityCat services do not directly service Kangaroo Point.

The M7 Clem Jones Tunnel, a toll tunnel, which opened in March 2010, has a connection on Shafston Avenue. It diverts some traffic travelling through the suburb while providing an additional transport route for residents. 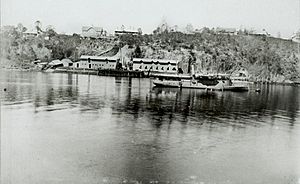 The Queensland Navy's main stores below the Kangaroo Point cliffs, with the gunship Paluma moored in the Brisbane River in the 1890s. 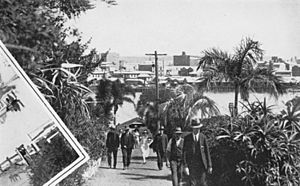 Before British settlement, Kangaroo Point was occupied by the Turrbal people. It is one of the earliest suburbs settled in Brisbane and subsequently, is one of Brisbane's oldest suburbs, rich in history and character. It had a reputation for violent and rowdy street gangs around the 1900s, with a number of street riots.

In 1823, explorer John Oxley described Kangaroo Point as a "jungle, fringed with mangroves with the higher land open forest, covered with grass". During the time of the subsequent convict settlement (1825–41), Kangaroo Point was cleared and used for cultivation of crops. Subsequently, the area was opened up for free settlement, the first land sales taking place on 13 December 1843. Among the early purchasers was Captain J.C.Wickham, the Police Magistrate. Surveyor James Warner built the first house at Kangaroo Point in 1844.

In 1887, the Yungaba Immigration Centre was built on Main Street at Kangaroo Point to replace the poor facilities at the existing centre in William Street.

For many years the suburb was dominated by the factories of heavy engineering businesses, particularly those involved in the maritime industry, such as Evans Deakin, Buzzacott & Co and Evans, Anderson, Phelan & Co. Evans Deakin built the largest ship ever constructed on the Brisbane River, the 66,000 tonne oil tanker Robert Miller, which became adrift in the river during the 1974 Brisbane flood. The last vessel to be built by Evans Deakin was an oil rig called Southern Cross. The company vacated the site in 1976, with it later being redeveloped for high-rise accommodation.

Stone was quarried from the cliffs and used as building material. Until the 1930s, Evans Anderson & Phelan built steam locomotives at their Kangaroo Point works for Queensland Railways, however their works were not located near a railway, so the completed locomotives were delivered along Main Street on temporary track.

Until the federation of the Australian colonies in 1901, the Queensland Navy's main storage facility was located in the suburb. The first ship-based radio transmission in Australia was made between HMAS Gayundah and the buildings in 1903. The naval stores buildings were occupied by the Royal Australian Navy until 1959, and then by the Australian Army until 1984. The heritage-listed buildings are now used by an adventure company focussing on river activities and rock climbing.

The opening of the Story Bridge in July 1940 was the most significant development of the suburb. Trolleybuses operated by the Brisbane City Council linked the suburb with Fortitude Valley via the Story Bridge from 1953 to 1969, running along Main Street from Woolloongabba and other eastern suburbs. 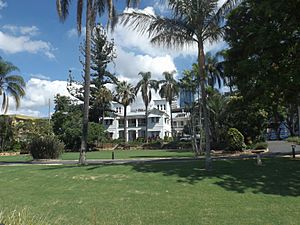 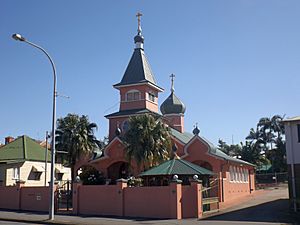 Kangaroo Point has a number of heritage-listed sites, including:

For tertiary studies, Kangaroo Point is host to Shafston International College and the Aboriginal Centre for the Performing Arts (ACPA) (which has now moved to the Judith Wright Arts Centre in Fortitude Valley) and was host to a Southbank Institute of TAFE campus until its demolition in 2009. Directly across the river from the cliffs is the Queensland University of Technology (Gardens Point campus) and in an adjacent suburb, the main campus for TAFE Queensland Brisbane (South Bank).

All content from Kiddle encyclopedia articles (including the article images and facts) can be freely used under Attribution-ShareAlike license, unless stated otherwise. Cite this article:
Kangaroo Point, Queensland Facts for Kids. Kiddle Encyclopedia.