East Brisbane State School is a heritage-listed state school at 90 Wellington Road, East Brisbane, Queensland, Australia. The school has two other street frontages: Vulture Street and Stanley Street. It was designed by Department of Public Works and built from 1899 to 1939. It is also known as Brisbane East State School. It was added to the Queensland Heritage Register on 6 November 1994. 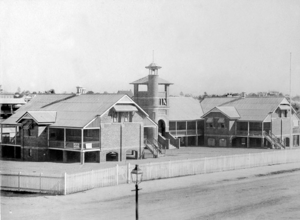 These buildings did not replace an earlier school on the site, but were erected to cater for a rapidly escalating East Brisbane/Woolloongabba population. East Brisbane's first suburban boom was in the mid-1880s, when the larger estates, such as Mowbraytown (1884), were subdivided, but at that time no provision was made for a state school, and East Brisbane children attended state schools at South Brisbane, Kangaroo Point and Dutton Park. The Brisbane's electric tramway reached Woolloongabba/East Brisbane in 1897, and in 1901 an extension through East Brisbane to Norman Park was constructed. The provision of this cheap, efficient form of public transport encouraged working-class families to the East Brisbane area on an unprecedented scale.

The Department of Public Instruction, when recognising in 1897 the need for the establishment of a primary school in East Brisbane, underestimated the rate of population growth in the area and potential school enrolment. When the first school contract was let in 1899, it was for a brick building to cost £1,800 and to accommodate 350 pupils; the school opened on 10 July 1899 with approximately 800 students, and by the end of the year, 1008 children were enrolled. By mid-1901, the school had been extended with the addition of two classrooms and a central entrance with bell turret, at a cost of £2,323. The school could then accommodate officially 730 pupils in four large and three small classrooms.

Alfred Barton Brady was employed with the Queensland Government as Government Architect from 1892-1922. Brady claimed that he always advised on arrangement, style and materials, but it appears that his Senior Assistant, Thomas Pye supervised much of the detailed design. During the 30 years they worked together in the Department, Brady and Pye assembled a talented group of architects and draftsmen who were considered the equal of any in Australia, including from 1893 to 1903 John Smith Murdoch, who was to become Commonwealth Director-General of Works in 1927. From the office of the Government Architect there developed a tradition of fine government buildings, including many post offices, customs houses and court houses throughout the State. The Department of Public Instruction had handled school design and construction between 1879 and 1893, following which responsibility was returned to the Government Architect's office. Two of the most significant early 20th century schools designed by the Government Architect's office are Wooloowin State School (1914) and Windsor State School (1915-16), both of which were considered model schools when erected.

Enrolments at East Brisbane State School continued to rise during the first decade of the 20th century. A large playshed was erected during the 1907-08 financial year, and in 1910-11 a separate, single-storeyed timber Infants' School was constructed at a cost of approximately £1,000. This building measured 78 by 25 feet (23.8 by 7.6 m), and comprised two classrooms with dual desks and "kindergarten equipment", the latter being considered modern and progressive at the time.

In 1910, the Australasian United Steam Navigation Company gave to the school the bell of the SS Melbourne. This still hangs in the bell turret.

From the 1910s to the 1930s, East Brisbane grew gradually as a residential suburb. By the late 1930s, the need for increased accommodation at Brisbane East State School became acute. During the 1937-38 financial year, the Department of Public Works undertook additions costing £4,370. This comprised the extension of the northern and southern wings of the building and the remodelling of the existing portions of these wings. In the following year, a further £6,860 worth of additions was authorised; this consisted of an extra storey erected over the central block, and alterations to the lower level of this block. The extensions were completed in 1939.

The changing character of Brisbane's inner suburbs away from family homes has resulted in falling enrolments. In 2013 there were 197 children enrolled with 19 teachers (12 full-time equivalent). Many of the children have English as a second language. 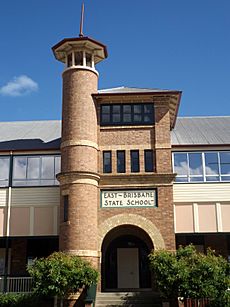 The East Brisbane State School is a brick building with a two-storeyed central section and two projecting single-storeyed wings flanking an entrance court. The roof is of corrugated iron. The entrance to the building is marked by a tower with a bell Turret and the name of the school in decorative lettering, over a flight of stairs to an arched porch. Originally the central block was single-storeyed and in 1939 the upper floor was added. The projecting single-storeyed wings have also been extended. Some of the verandahs have been enclosed.

The walls are of polychrome brickwork. Internally the walls are rendered to a height of 6 feet (1.8 m) above the floor, beyond that height the brickwork being kalsomined. In the 1899 section, the roof members are of light wrought iron, with ceilings of diagonal pine boarding.

The under part of the school is open for play grounds and is asphalted. The rooms are well lighted from high gable windows; outlet ventilation from panels in the ceilings is conducted through iron tubing and Boyle's ventilators.

East Brisbane State School was listed on the Queensland Heritage Register on 6 November 1994 having satisfied the following criteria.

The use of brick and restrained detailing is typical for government buildings of the period. The building displays characteristics of the style through its simple massing, contrasting materials and central tower.

East Brisbane State School is significant as an outstanding example of a school building designed by the office of the Queensland Government Architect, which at the time was the equal of any architectural office in Australia.

All content from Kiddle encyclopedia articles (including the article images and facts) can be freely used under Attribution-ShareAlike license, unless stated otherwise. Cite this article:
East Brisbane State School Facts for Kids. Kiddle Encyclopedia.