East Brisbane is an inner suburb of Brisbane, Australia, located 2.5 kilometres (1.6 mi) south-east of the CBD. It is mostly residential, with some small commercial areas, and has many original Queenslander houses.

The significant housing areas in East Brisbane were founded during the Brisbane property boom of the 1880s. For example, one such development was the Heathfield Estate, which was released in 1886.

Mowbray Park, a large riverside park, was until the 1930s, the site of a public swimming pool built into the river. 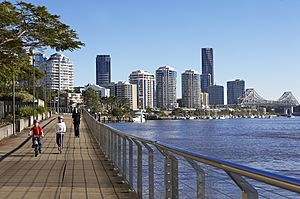 Major roads include Lytton Road, Wellington Road, and Latrobe Street in the north, and Vulture Street and Stanley Street in the south of the suburb. The eastern side of the suburb rises to a small hill with some views over Woolloongabba and the CBD and falls away to Norman Creek. 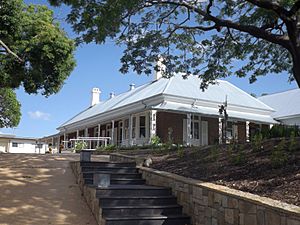 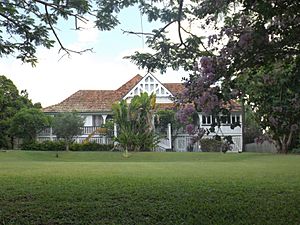 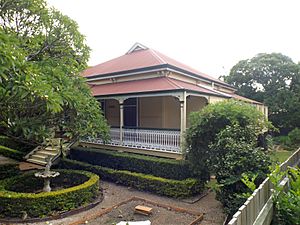 East Brisbane has a number of heritage-listed sites, including:

Public transport to the suburb is now predominantly provided by regular bus services and frequent CityCat services, which leave from Mowbray Park. The suburb is also an easy walk from the Woolloongabba bus station.

All content from Kiddle encyclopedia articles (including the article images and facts) can be freely used under Attribution-ShareAlike license, unless stated otherwise. Cite this article:
East Brisbane, Queensland Facts for Kids. Kiddle Encyclopedia.