Nauru, officially the Republic of Nauru, is a sovereign island nation located in the Micronesian South Pacific. Its nearest neighbour is Banaba Island in the Republic of Kiribati, 300 kilometres (190 mi) due east. Nauru is the world's smallest island nation, covering just 21 square kilometres (8 sq mi), the smallest independent republic, and the only republican state in the world without an official capital. With 10,670 residents, it is the third least-populated country after Vatican City and Tuvalu.

It sells phosphate (a chemical) to Australia. English and Nauruan are the official languages of Nauru. The current president of Nauru is Lionel Aingimea.

Nauru was invaded by Germany in 1888, and a Germany and Britain began mining the island's phosphate together early in the 20th century. Japan invaded Nauru in 1942 and left the island in 1945. It became a country in 1968 and joined the United Nations in 1999. 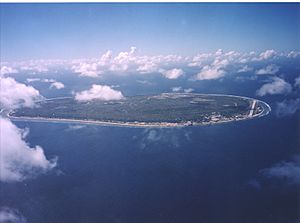 Nauru is a 21 square kilometres (8 sq mi) oval-shaped island in the southwestern Pacific Ocean, 42 kilometres (26 mi) south of the Equator. The island is surrounded by a coral reef, which is exposed at low tide and dotted with pinnacles. The presence of the reef has prevented the establishment of a seaport, although channels in the reef allow small boats access to the island. A fertile coastal strip 150 to 300 metres (490 to 980 ft) wide lies inland from the beach.

Coral cliffs surround Nauru's central plateau. The highest point of the plateau, called the Command Ridge, is 71 metres (233 ft) above sea level. The only fertile areas on Nauru are on the narrow coastal belt, where coconut palms flourish. The land surrounding Buada Lagoon supports bananas, pineapples, vegetables, pandanus trees, and indigenous hardwoods such as the tomano tree.

Nauru was one of three great phosphate rock islands in the Pacific Ocean (the others were Banaba (Ocean Island) in Kiribati and Makatea in French Polynesia). The phosphate reserves on Nauru are now almost entirely depleted. Phosphate mining in the central plateau has left a barren terrain of jagged limestone pinnacles up to 15 metres (49 ft) high. Mining has stripped and devastated about 80 per cent of Nauru's land area, and has also affected the surrounding Exclusive Economic Zone; 40 per cent of marine life is estimated to have been killed by silt and phosphate runoff.

There are only about 60 recorded vascular plant species native to the island, none of which are endemic. Coconut farming, mining, and introduced species have caused serious disturbance to the native vegetation. There are no native land mammals, but there are native insects, land crabs, and birds, including the endemic Nauru Reed Warbler. The Polynesian rat, cats, dogs, pigs, and chickens have been introduced to Nauru from ships.

There are limited natural fresh water resources on Nauru. Rooftop storage tanks collect rainwater, but the islanders are mostly dependent on three desalination plants housed at Nauru's Utilities Agency. Nauru's climate is hot and very humid year-round because of its proximity to the equator and the ocean. Nauru is hit by monsoon rains between November and February, but does not typically experience cyclones. Annual rainfall is highly variable and is influenced by the El Niño-Southern Oscillation, with several significant recorded droughts. The temperature on Nauru ranges between 26 °C (79 °F) and 35 °C (95 °F) during the day and between 22 °C (72 °F) and 34 °C (93 °F) at night.

As an island, Nauru is vulnerable to climate and sea level change. Nauru is the seventh most global warming threatened nation due to flooding. At least 80 per cent of the land of Nauru is well elevated, but this area will be uninhabitable until the phosphate mining rehabilitation programme is implemented.

Nauru is divided into fourteen administrative districts which are grouped into eight electoral constituencies. 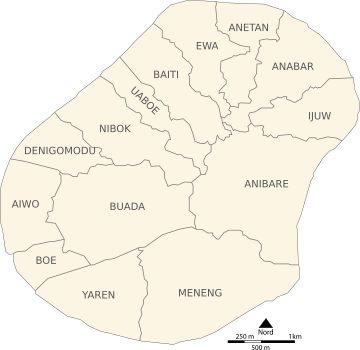 All content from Kiddle encyclopedia articles (including the article images and facts) can be freely used under Attribution-ShareAlike license, unless stated otherwise. Cite this article:
Nauru Facts for Kids. Kiddle Encyclopedia.