Kiribati (pronounced "KiriBASS") is a country in the Pacific Ocean. It has 33 atolls, groups of tiny islands. The country is near the equator. Its capital is South Tarawa, on the Tarawa atoll. Kiribati's easternmost islands, the southern Line Islands, south of Hawaii, have the most advanced time on Earth: UTC+14 hours.

Kiribati became independent from the United Kingdom in 1979. The capital, South Tarawa, which is now the most populated area, consists of a number of islets, connected by a series of causeways. These comprise about half the area of Tarawa Atoll. Kiribati signed a "Treaty of Friendship and Territorial Sovereignty" (also called the "Treaty of Tarawa") with the United States in 1979.

Kiribati is a member of the Pacific Community (SPC), Commonwealth of Nations, the IMF, and the World Bank, and became a full member of the United Nations in 1999. 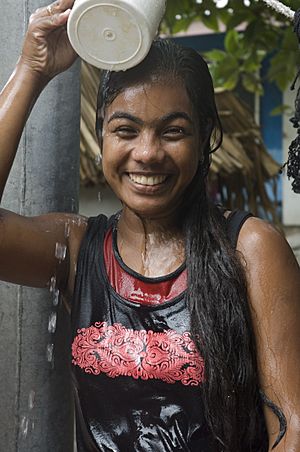 Clean water in the village of Banraeaba, in Tarawa, Kiribati

The permanent population is just over 110,000 (2015), more than half of whom live on Tarawa Atoll. The state comprises 32 atolls and reef islands (1.3 million square miles). Their spread reaches both the equator and the 180th meridian. The official languages of Kiribati are English and Gilbertese. It is one of the poorest nations in the Pacific Ocean. It has few natural resources and Tourism is an important industry.

The native people of Kiribati are called I-Kiribati. Ethnically, the I-Kiribati are Micronesians. Recent archaeological evidence indicates that Austronesians originally settled the islands thousands of years ago. Around the 14th century, Fijians, Samoans, and Tongans invaded the islands, thus diversifying the ethnic range and introducing Polynesian language traits. The people of Kiribati speak an Oceanic language called Gilbertese.

Kiribati consists of 32 atolls and one solitary island (Banaba), extending into the eastern and western hemispheres, as well as the northern and southern hemispheres. It is the only country that is situated within all four hemispheres. The groups of islands are: 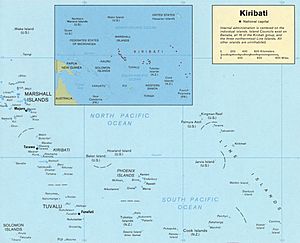 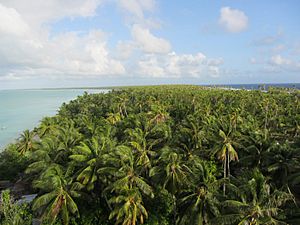 Banaba (or Ocean Island) is a raised-coral island. It was once a rich source of phosphates, but was exhausted in mining before independence. The rest of the land in Kiribati consists of the sand and reef rock islets of atolls or coral islands, which rise only one or two metres above sea level.

The soil is thin and calcareous. It has a low water-holding capacity and low organic matter and nutrient content—except for calcium, sodium, and magnesium. Banaba is one of the least suitable places for agriculture in the world.

According to the Pacific Regional Environment Programme, two small uninhabited Kiribati islets, Tebua Tarawa and Abanuea, disappeared underwater in 1999. The United Nations Intergovernmental Panel on Climate Change predicts that sea levels will rise by about 50 cm (20 in) by 2100 due to global warming and a further rise would be inevitable. It is likely that within a century the nation's usable land will become subject to increased soil salination and will be largely submerged.

Gradual sea-level rise also allows for coral polyp activity to raise the atolls with the sea level. Also, coral bleaching has led to the death of up to 80% of the coral. 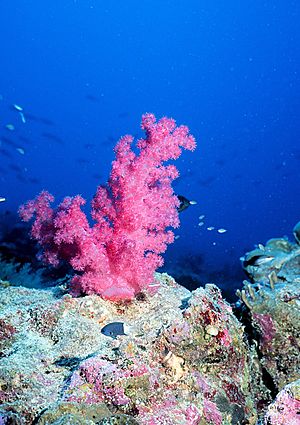 Because of the young geological age of the islands and atolls and high level of soil salination the flora of Kiribati is relatively poor. It contains about 83 indigenous and 306 introduced plants on Gilbert Islands, whereas the corresponding numbers for Line and Phoenix Islands are 67 and 283. None of these species are native, and about half of the indigenous ones have a limited distribution and became endangered or nearly extinct due to human activities such as phosphate mining.

Coconut and pandanus palms and breadfruit trees are most common wild plants, whereas the five most cultivated crops are Chinese cabbage, pumpkin, tomato, watermelon and cucumber. Over eighty percent of the population participates in either farming or fishing. 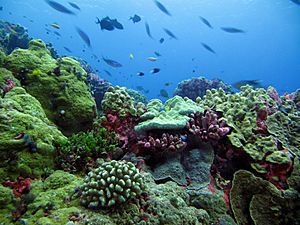 Seaweed farming is an important part of the economy, with two major species introduced to the local lagoons from the Philippines in 1977. There is also the black-lipped pearl oyster, shellfish, strawberry conch and Anadara cockles.

There are 600–800 species of fish, some 200 species of corals and about 1000 species of shellfish. Fishing mostly targets the family Scombridae, particularly the skipjack tuna and yellowfin tuna as well as flying fish.

Kiribati has a few land mammals, they include the Polynesian rat, dogs and pigs. Dogs introduced by European settlers have continued to grow in numbers and are roaming in traditional packs, particularly around South Tarawa.

All content from Kiddle encyclopedia articles (including the article images and facts) can be freely used under Attribution-ShareAlike license, unless stated otherwise. Cite this article:
Kiribati Facts for Kids. Kiddle Encyclopedia.