Pandanus tectorius is a species of Pandanus (screwpine) that is native to Malesia, eastern Australia, and the Pacific Islands. It grows in the coastal lowlands typically near the edge of the ocean. Common names in English include thatch screwpine, Tahitian screwpine, hala tree, pandanus, and pu hala in Hawaiian. The fruit is sometimes known as hala fruit.

P. tectorius is a small tree that grows upright to reach 4–14 m (13–46 ft) in height. The single trunk is slender with brown ringed bark. It is spiny, grows to 4.5–11 m (15–35 ft) in width, and forks at a height of 4–8 metres (13–26 ft). It is supported by prop roots that firmly anchors the tree to the ground. Roots sometimes grow along the branch, and they grow at wide angles in proportion to the trunk. 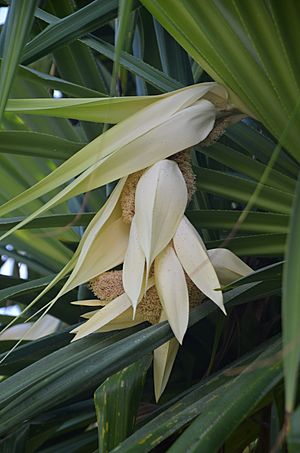 In Hawaiʻi the male flower is called hīnano and the bracts are used for making very fine mats (moena hīnano' or ʻahu hīnano).

The female P. tectorius trees produce a segmented, large fruit. Although not closely related, the fruit resembles a pineapple. The fruit of P. tectorius is either ovoid, ellipsoid, subglobose or globose with a diameter of 4–20 cm (1.6–7.9 in) and a length of 8–30 cm (3.1–11.8 in). The fruit is made up of 38–200 wedge-like phalanges, often referred to as keys or carpels, which have an outer fibrous husk and are 8 inches in length. There are roughly 40 to 80 keys in each fruit and the color of the fruit can be yellow, orange, or red with a green top. Phalanges contain two seeds on average, with a maximum of eight reported. The phalanges are buoyant, and the seeds within them can remain viable for many months while being transported by ocean currents.

The leaves of Pandanus tectorius are usually 90–150 cm (3.0–4.9 ft) in length and 5–7 cm (2.0–2.8 in) in width. They possess saw-like margins. Some varieties have spines along the edges and ribs throughout the leaves. The leaves are spirally arranged at the end of the branches.

Pandanus tectorius was first described by Sydney Parkinson in 1774. It is an angiosperm belonging to the genus Pandanus of the family Pandanaceae.

Pandanus tectorius grows natively from the Philippines through the Pacific Ocean to Hawaii. It is found in parts of Malesia (the Cocos (Keeling) Islands, Java, the Lesser Sunda Islands, the Maluku Islands and the Philippines), throughout Papuasia, and in most of the tropical Pacific. In Australia, it is native to an area from Port Macquarie in New South Wales to northern Queensland. Both the US and the Hawaiian Islands recognize only one indigenous species, P. tectorius. Its exact native range is unknown due to extensive cultivation; it may be an early Polynesian introduction to many of the more isolated Pacific islands on which it occurs. These islands include Micronesia and Melanesia. In Hawaii, P. tectorius is found natively on all the main islands except Kahoʻolawe, and it is known to have predated human settlement, based on seed and pollen samples taken from Kauaʻi's Makauwahi Cave.

Pandanus tectorius naturally grows in coastal regions, such as on mangrove margins and beaches, at elevations from sea level to 610 m (2,000 ft). It requires 1,500–4,000 mm (59–157 in) of annual rainfall and seasons will fluctuate from wet to dry.

Pandanus tectorius is considered more drought tolerant than coconut trees. The trees have adapted to drought by reducing fruiting. Thatch Screwpine is well adapted to grow in the many soil types present on coasts, including quartz sand, coral sand, and peat, as well as in limestone and basalt. P. tectorius is salt and wind tolerant and favors slightly acidic to basic soil (pH of 6-10). The trees are strong and can typically withstand tropical storms. It prefers to grow in full sunlight, but grows well with 30-50% shade. It will not tolerate shade above 70%.

There are a wide range of natural enemies that pose a threat to P. tectorius such as parasites, pathogens, and herbivores. They attack the leaves, roots, stems, and growing points. The stick insect Megacrania batesii lives and feeds only on P. tectorius and two other Pandanus species.

Pandanus tectorius in Australia is threatened by a sap-sucking insect, Jamella australiae, a species of the genus Jamella of the subfamily Flatoidinae, known as the Pandanus planthopper. It has caused much damage to plants on the northern coast of New South Wales, before making its way up the coast to Noosa and the Gold Coast in Queensland in the 1990s. Since then it has infested pandanus further north, killing about 80 per cent of the P. tectorius population to the south of Gladstone, Queensland, and has since reached Yeppoon on the Capricorn Coast, where P. tectorius plays an important part in preventing coastal erosion. A natural predator in the form of a wasp native to northern Queensland, Aphanomerus pusillus, has been introduced on Fraser Island and in Byfield National Park as one of methods used to combat the pest. Other methods used on Fraser Island including the injection of insecticide into the plant, stripping infested leaves away, and breeding new plants from local stock. The wasp can only be used in the warmer months on the island, as it does not thrive in the cooler climate of southern Queensland.

Pandanus tectorius plants grown from seed tend to flower at around 15 years old versus those grown from branch cutting. Flowering from trees grown these way happen much earlier, always by 6 years old and typically by 3 to 4 years of age. (thom) The trees are either male of female. Female trees typically flower 1 to 3 times per year while male trees will flower every 2 months. It is thought to produce sexually in Hawaii, but there is some evidence that apomixis occurs. Small insects, such as bees, and wind are usually the pollinators. It takes 1 to 2 years from pollination to harvest to produce fruit on female trees.

Seasons vary amongst locations and varieties. For example, in Fiji the pollination season is March to May, in Northern Australia it is April to August, and in Micronesia, there are two season December to March and July to September. Most varieties produce 8 to 12 fruits per tree every 2 years. Each fruit usually weighs between 7 and 15 kg and contains 35 to 80 edible keys.

Pandanus tectorius plants are usually propagated by seed in Hawaii. Soak the keys in cool tap water for 5 days while frequently changing the water. Viable keys will float, so it is important to keep them. In Growing native Hawaiian plants: a how-to guide for the gardner, Bornhorst says to remove the fleshy layer of the key and then bury the seed half-way in planting soil. It is important to keep the soil most.

P. tectorius can also be grown from large cutting. Selected forms are propagated by stem cuttings in Micronesia. Morphological traits looked for include aerial roots. Plants selected have 2/3 of their leaves trimmed off to prevent water loss. In Native Hawaiian plants for tropical seaside landscaping, Moriarty says for best results use mature branches with leaves and small aerial roots. Then root in a sand bed. Plants grown from cutting produce fruit in 4 to 6 years.

Propagation by grafting is not applicable.

The fruit of Pandanus tectorius is edible. Some varieties and cultivars contain significant amounts of calcium oxalate, so need thorough cooking before being consumed. Other cultivars contain very little to no calcium oxalate and can be eaten raw. It is an important food source in the atolls of Micronesia and Polynesia, with the fruit commonly eaten raw or turned into a dried paste or flour. It is also one of the traditional foods of Maldivian cuisine. The fibrous nature of the fruit also serves as a natural dental floss. It is also used in Samoan culture as a ula fala, a necklace made out of the dried fruit painted in red and is worn by the Matai during special occasions and functions.

Australian Aborigines extracted the slender, edible seeds. This seed and the fruit, was an important food.

The tree's leaves are often used as flavoring for sweet dishes such as kaya jam. It is also used in Sri Lankan cookery, where the leaves are used to flavor a variety of curries. Leaves were used by the Polynesians to make baskets, mats, outrigger canoe sails, thatch roofs, and grass skirts.

The fragrant male flowers are used in perfumery and are also distilled to make Kewra.

A large shrub or small tree of immense cultural, health, and economic importance in the Pacific, it is second only to coconut on atolls. It grows wild mainly in semi-natural vegetation in littoral habitats throughout the tropical and subtropical Pacific, where it can withstand drought, strong winds, and salt spray. It propagates readily from seed, but it is also widely propagated from branch cuttings by local people for farms and home gardens. It grows fairly quickly, and all parts are used, from the nutritious fruits of edible varieties to the poles and branches in construction to the leaves for weaving and garlands. The plant is prominent in Pacific culture and tradition, including local medicine.

Hundreds of cultivated varieties are known by their local names and characteristics of fruits, branches, and leaves. At present, there is evidence that this diversity is declining, with certain varieties becoming difficult to find. The reasons include less replanting, deforestation, fire, flagging interest by the new generation, and rapid population growth leading to urbanization.

The seal of Punahou School in Honolulu, Hawaii features the hala tree, in part because lauhala, the art of weaving with the leaves of that tree, is pivotal to the history of the island, with everything from houses to pillows being made in this fashion. Local legend tells of an aged Hawaiian couple who lived long ago above the present Punahou campus, and had to travel far for water. They prayed each night for a spring, but to no avail. Finally one night, in a dream answering their prayers, they were told to uproot the stump of an old hala tree. They did as they were told and found a spring of clear, sweet water, which they named Ka Punahou, the New Spring. According to legend, Punahou School's lily pond is fed by this same spring.

All content from Kiddle encyclopedia articles (including the article images and facts) can be freely used under Attribution-ShareAlike license, unless stated otherwise. Cite this article:
Pandanus tectorius Facts for Kids. Kiddle Encyclopedia.